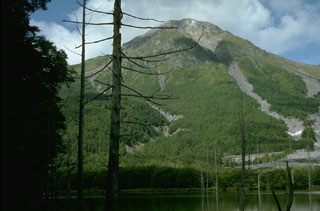 
A hydrothermal explosion around 1430 on 11 February killed four people at a highway construction site, located in a geothermal area along the narrow Azusa-gawa River ~2 km SE of the summit. The Geological Survey of Japan reported that there were at least two explosions from the vent (12 m long and 6 m wide). The first, a large explosion, created a 1,500-m-high plume composed of mud and gas, and caused collapse of the river bank, burying the primary vent. A second explosion scattered mud and gas within 200 m of the vent. JMA staff who surveyed the site on 12 February and 13 March noted that fume rising to a height of 20 m was almost at the boiling point. No explosions have been reported since 12 February.