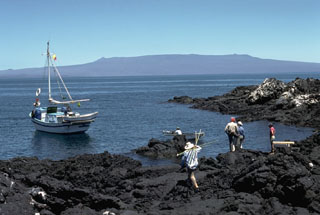 
Alcedo . . . had two new craters when visited by Jonathan R. Green during 16-18 February 1994. According to him and Jim Stimac, who saw the craters in February 1995, the craters were located on the S wall of the caldera. At the same two points, Geist and others (1994) had previously mapped sulfur veneer and fumaroles in 1991. The points lie ~1.4 km W of El Geyser, a fumarole that lies within a similar crater and sits farther E along a common fault. . . . Geist confirmed that there were no craters in this vicinity when he made his map, and in addition Green clearly reported that these two craters were new.

Besides the opening of these new craters, Green (1994) described Alcedo activity during November-December 1993, and January 1994. This included local tremor, explosions, noises from one or more subterranean sources, and increased fumarolic activity. The larger crater was associated with adjacent deposits of ash, debris, and mud. The craters were also observed during a July 1994 helicopter flyover. A videotape made during the flyover (archived at Galápagos National Park Headquarters) documented vigorous steam plumes coming from both craters, similar to plumes seen by Green in February 1994. Green, who showed the craters on a sketch in his report, estimated that the larger crater was 75 x 100 m.

Although groups do occasionally visit, Alcedo is uninhabited and no one witnessed the eruption. Green's report stated: "Additional information from other guides places this activity later than mid-November 1993 and prior to the end of December 1993."

Layered tephra, up to perhaps 2-m thick, lies at the crater margins and extends for several hundred meters, Stimac reported. Based on the observed deposits, and on crater morphology and location, visiting volcanologists concluded the craters were formed by hydrothermal explosions.

Geist and others (1994) point out that Alcedo is distinct from other Galápagos volcanoes (and many oceanic islands) in that it has erupted rhyolite and not just basalt as seen on all the adjacent islands.

Geological Summary. Alcedo is one of the lowest and smallest of six shield volcanoes on Isabela Island. Much of the flanks and summit caldera are vegetated, but young lava flows are prominent on the N flank near the saddle with Darwin volcano. It is the only Galapagos volcano known to have erupted rhyolite as well as basalt, producing about 1 km3 of late-Pleistocene rhyolitic tephra and lava flows from several vents late in its history. Recent faulting has produced a moat around part of the 7-8 km caldera floor, which is elongated N-S and appears to be migrating to the south. Fewer circumferential fissures occur on Alcedo than on other western Galápagos volcanoes. An eruption attributed to Alcedo in 1954 (Richards, 1957) is more likely to have been from neighboring Sierra Negra (Simkin 1980, pers. comm.). Photo-geologic mapping by K.A. Howard (pers. comm.) revealed only one flow on 30 October 1960 photographs that does not appear on 30 May 1946 photos. That is near Cartago Bay, low on the SE flank, rather than the 610-m, NE-flank elevation listed for the 1954 eruption. An active hydrothermal system is located within the caldera.