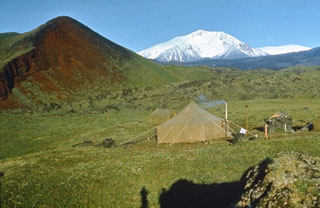 
The volcano's 17-km-long Bilchenok Glacier has begun to advance. The glacier, located in Plosky's caldera, has three large ice cascades on its NW flank. Previous surges of this glacier occurred in 1959, 1976, and 1977. Photo reconaissance flights over Kamchatkan glaciers 10-11 March revealed that Bilchenok's front was 1 km from its 1980 position and 500 m from the 1959 maximum surge. Its surface was broken into blocks, and rupture disturbances of the snow cover were observed.

Geological Summary. The Ushkovsky (formerly known as Plosky) complex is a large compound volcanic massif located at the NW end of the Kliuchevskaya volcano group. The summit of Krestovsky (Blizhny Plosky) volcano, about 10 km NW of Kliuchevskoy, is the high point of the complex. Linear zones of cinder cones are found on the SW and NE flanks and on lowlands to the west. The Ushkovsky (Daljny Plosky) edifice SE of Krestkovsky is capped by an ice-filled 4.5 x 5.5 km caldera containing two glacier-clad cinder cones with large summit craters. A younger caldera at the summit of Daljny was formed in association with the eruption of large lava flows and pyroclastic material from the Lavovy Shish cinder cones at the foot of the volcano about 8,600 years ago. An explosive eruption took place from the summit cone in 1890.