A composite panorama from the NE rim of Brouton caldera on Uratman volcano shows Brouton Bay that fills the caldera floor due to a narrow gap in the NNE rim (right). A small settlement on the NE shore of the bay lies at the foot of the cone that was constructed in the SE part of the caldera. The 7.5-km-wide caldera formed during the Pleistocene. 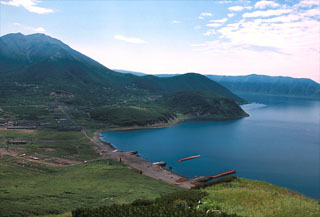