The irregular summit lava dome in the Iwakisan central crater forms the high point in this view from the SE and has six craters on the flanks. Chokaisan is the rounded peak to the left. Debris avalanche deposits from repeated summit and flank collapse surround the volcano on all sides. Historical eruptions have been recorded since 1597 CE and have consisted primarily of small-to-moderate phreatic explosions. 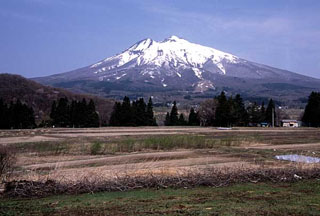