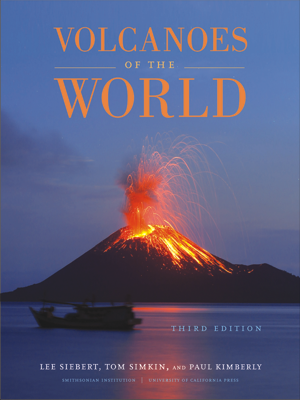 "Volcanoes of the World compiles and lists all of earth's eruptions into one primary scientific source. It is a fundamental research tool and the last word on many issues. There is nothing else like it." — William I. Rose, Michigan Technological University

"Volcanoes of the World stands alone. To my knowledge (as a practicing volcanologist for more than four decades), there are no competing works in the scientific literature comparable in purpose, scope, and scholarship." — Robert Tilling, Volcano Science Center, U.S. Geological Survey

This impressive scientific resource presents up-to-date information on ten thousand years of volcanic activity on Earth. In the decade and a half since the previous edition was published new studies have refined assessments of the ages of many volcanoes, and several thousand new eruptions have been documented. This edition updates the book's key components: a directory of volcanoes active during the Holocene; a chronology of eruptions over the past ten thousand years; a gazetteer of volcano names, synonyms, and subsidiary features; an extensive list of references; and an introduction placing these data in context. This edition also includes new photographs, data on the most common rock types forming each volcano, information on population densities near volcanoes, and other features, making it the most comprehensive source available on Earth's dynamic volcanism.

Lee Siebert has compiled data on the world's volcanoes since 1974 and was Director of the Smithsonian's Global Volcanism Program (GVP) from 2007 to 2010. Paul Kimberly joined the Smithsonian in 1995 and is currently GVP Program Manager. Tom Simkin (1933-2009), served as GVP founder and director from 1968-1995 in a distinguished career in volcanology that spanned more than four decades.