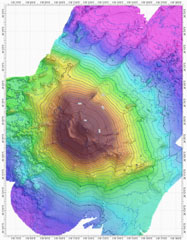 
Three previously unknown submarine arc stratovolcanoes have been identified at the S end of the Kermadec Ridge: Rumble V (36.140°S, 178.195°E, summit 700 m below sea level); Tangaroa (36.318°S, 178.031°E, summit 1,350 m below sea level); and Clark (36.423°S, 177.845°E, summit 1,150 m below sea level) (figure 1). All three have basal diameters of 16-18 km and rise from the seafloor at ~2,300 m depth. The first evidence of the volcanoes was from GLORIA side-scan mapping of the southern Havre Trough-Kermadec Ridge region in 1988 (Wright, 1990). Later investigations, including a photographic and rock-dredge study during the 3-week Rapuhia cruise (early 1992), confirmed previous interpretations. Side-scan and photographic data show a complex terrain of lava flows and talus fans on the flanks of all three volcanoes, with the most pristine-looking morphology at Rumble V. During the 1992 cruise, gas bubbles were detected acoustically, rising from the crests of Rumble III, IV, and V. No gas bubbling was evident from Tangaroa or Clark. Bathymetric surveys indicated that the summits of the shallowest volcanoes, Rumble III and IV, were at ~140 and 450 m, respectively, below the sea surface.

Geological Summary. A previously unknown submarine volcano, Rumble V was discovered in 1992 at the southernmost of a group of seamounts on the southern Kermadec Ridge, known as the Rumbles. It rises more than 2,000 m to nearly 400 m below the sea surface and shows a pristine morphology. Andesitic and basaltic-andesite rocks have been dredged from Rumble V, which lies 17 km ESE of Rumble IV. A large plume of gas bubbles was acoustically detected rising from the summit of Rumble V in 1992, and subsequent expeditions detected evidence of vigorous hydrothermal activity.