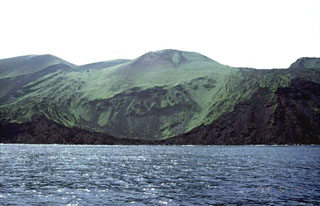 
Volcanic earthquakes and tremors were detected near the end of March by instruments maintained by Hokkaido University.

This small island 55 km W of Hokkaido in the Japan Sea consists of two coalescing volcanoes. An eruption in August 1741 produced heavy ashfall on the Hokkaido mainland. A violent explosion and landsliding from the Nishi-yama cone accompanied a large tectonic earthquake and a major tsunami that killed 1,475 people, most on the W coast of the Oshima Peninsula. Subsequent eruptions through early 1742 produced a new central cone and lava flows. Minor explosive activity was documented in 1759, 1786, and 1790.

Geological Summary. Oshima-Oshima, a small, 4-km-wide Japan Sea island 55 km west of the SW tip of Hokkaido, is the emergent summit of two coalescing basaltic-to-andesitic stratovolcanoes. Higashiyama, at the east end of the island, is cut by a 2-km-wide caldera covered on its west side by Nishiyama volcano. The western cone failed during an eruption in 1741, creating a large horseshoe-shaped caldera breached to the north that extends from the summit down to the sea floor at the base of the volcano and producing a mostly submarine debris avalanche that traveled 16 km. A tsunami associated with the collapse swept the coasts of Hokkaido, western Honshu, and Korea, and caused nearly 1500 fatalities. The 1741 eruption, the largest in historical time at Oshima-Oshima, concluded with the construction of a basaltic pyroclastic cone at the head of the breached caldera. No eruptions have occurred since the late-18th century.