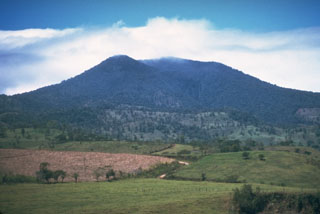 An unrelated swarm consisting of 27 events occurred during the same period near the village of Tierras Morenas at the SSW foot of Tenorio. The swarm was centered at 10.6°N, 85.0°W and was aligned along a 7-km NE-SW trend, possibly correlating to known faults. The earthquakes had depths of 7-12 km and magnitudes of 0.4-3.3.

Geological Summary. The 225 km2 dominantly andesitic Tenorio volcanic massif anchors the SE end of the Guanacaste Range and consists of a cluster of densely forested NNW-SSE-trending volcanic cones. Overlapping lava flows from the principal peak, Tenorio, blanket the NW-to-SW flanks and descend the NE flank. The NW-most of three craters of the central cone is sparsely vegetated and appears to be the most recently active. Volcán Montezuma to the north has twin craters, the northern of which fed a lava flow to the NE. Additional pyroclastic cones are found to the NE and SW of the central complex, and the Bijagua lava domes were constructed on the northern flank. A major debris avalanche covered about 100 km2 below the S flank. A legend exists of an eruption in 1816, but the volcano was densely forested at the time of an 1864 visit by Seebach and is not considered to have erupted in historical time. Fumarolic activity is present on the NE flank.