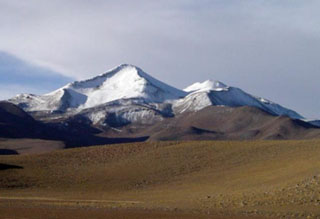 
A large-scale concentric pattern of deformation was detected between May 1996 and December 2000 centered on Uturuncu volcano, Bolivia (figure 1), based on satellite geodetic surveys (Pritchard and Simons, 2002). The observed deformation is primarily surface uplift with a maximum rate at the uplift center of 1-2 cm/year in the radar line-of-sight direction (figure 2). A reconnaissance investigation by a team composed of scientists from Bolivia, Chile, the USA, and the UK, took place during 1-6 April 2003 to identify any other signs of volcanic unrest and assess past volcanic behavior.

A single-component vertical one-second seismometer was placed at five locations for periods of up to 14 hours. Data were recorded at a rate of 100 samples per second on a laptop computer. Persistent low-level seismicity was observed mainly from one source location on the NW flank, close to the center of deformation observed by satellite surveys. Two other sources within the volcanic edifice could not be located with the available data. The rate of volcanic earthquakes was up to 15 per hour, and the magnitudes were in the 0.5-1.5 range based on coda length. The sources were considered to be within 3-4 km of the surface (much shallower than the deformation source); more accurate information will be available when the data are analyzed further.

The summit region of Uturuncu has two active fumarole fields with substantial sulfur production and areas of clay-silica hydrothermal alteration. Maximum temperatures in four fumaroles were measured at 79-80°C. A hot spring on the NW flanks had a temperature of 20°C.

Uturuncu is a stratovolcano composed of hypersthene andesites, hypersthene-biotite dacites, and biotite-hornblende dacites. Almost all the exposed products are extensive coulée-type lavas and domes; no pyroclastic deposits were observed. Flow features are well-preserved on the youngest lavas. A wide variety of xenoliths were found in most lavas, including mafic magmatic inclusions, cumulates, microcrystalline igneous inclusions, and hornfels of possible basement rocks including sandstones and calcareous rock types.

Lavas around the summit area appear to be the most recent products, but have been affected by glaciation; there is however no present-day ice. There is thus no evidence yet for Holocene activity. The recent unrest manifested by substantial ground deformation and reconnaissance seismicity indicate, however, that a magmatic system is still present and therefore further monitoring is warranted.