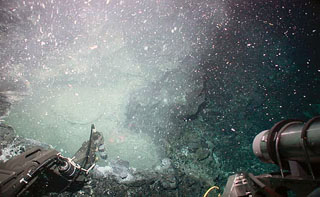 
In a recent publication, Rubin and van der Zander (2005) discuss radiometric methods for dating lavas as one means to establish eruption chronologies. Some of their techniques were applied to samples of fresh lava (erupted September-October 2003) found on the East Pacific Rise (EPR) at 10°44'N (Voight and others, 2004). This location lies ~ 1,900 km WNW of the Galápagos Islands. During a November 2003 biological sampling visit to the EPR at 10°44'N, divers in the submersible Alvin expected to be revisiting an established hydrothermal vent field. Instead, they found indicia all of which were consistent with a recent eruption, notably fresh lava, bacterial mats, and diffuse snow- blower vents issuing from lava collapses. The team acted immediately after the cruise by sending the lava samples to the University of Hawai`I for dating. Researchers there determined that an eruption had occurred within 1 to 2 months prior to the site visit. A hydrophone array (designated N-EPR) nominally monitored this part of the EPR since 1996, but not in real time. Unfortunately, the system failed to record data during the 2002-2004 interval due to a hardware problem.

Ages for lavas erupted within the past 1.5-2 years were determined with the 210Po-210Pb dating method (Rubin and others, 1994). To use this method, analyses should begin as soon as possible after samples are collected from suspected eruption locales. Radioactive disequilibrium is largest, and temporal resolution of the method is highest, immediately following eruption. According to Rubin and van der Zander (2005, p. 28) "Polonium is volatile at magmatic temperatures and degasses from magmas when they erupt. This creates an initial 210Po (half-life = 138.4 day) deficit relative to grand parental 210Pb in freshly erupted magmas. This deficit is subsequently erased with time via radioactive ingrowth toward secular equilibrium."

Geological Summary. Divers in the submersible Alvin discovered an extremely fresh lava flow in an unexpected location at 10°44'N on the East Pacific Rise during an expedition in November 2003. The young flow was covered by bacterial mats, had large amounts of bacterial floc ("snow-blowers") issuing from diffuse vents, and was sparsely populated by small animals. Uranium-series dating indicated that the eruption had taken place within a time window only a few months to weeks prior to the observations. This segment of the East Pacific Rise, located just north of the Clipperton Transform Fault, is an area with an estimated low magma production rate.