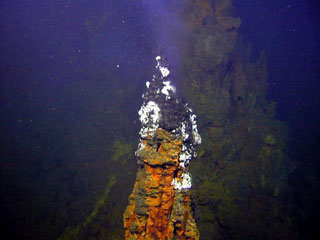 
In the latest of several investigations since 1996, scientists again explored Brothers submarine volcano, working there during 28 July-16 August 2007 (figure 1). The German research ship RV Sonne provided the platform for these 2007 investigations, which included bathymetric mapping, measurements of the water column, and observations of hydrothermal activity. This report summarizes some of the mapping and basic observations made at Brothers on this recent and past cruises.

Brothers rests along the active Kermadec arc at a point ~ 450 km NE offshore of New Zealand's North Island (figure 1). For reference, the volcano White Island lies ~ 50 km off the coast in the Bay of Plenty at the N end of North Island ("W," figure 1). Parts of Brothers have been explored previously from surface ships and submersibles, documenting the volcano as hydrothermally active but not in eruption.

Earlier surveys at Brothers. In February 1996, the first sulfide samples from the southern Kermadec arc were dredged from Brothers. On a cruise in late 1998, New Zealand scientists confirmed that Brothers hosted active hydrothermal vents. Using towed cameras and videos, scientists observed tall chimneys perched on the NW caldera's steep walls. On that 1998 cruise, scientists also saw clear evidence of hot, metal- and sulfur-rich fluids expelled from inside the caldera. Numerous samples from Brothers have been acquired and analyzed (for example, see de Ronde and others, 2005).

Other cruises during 1999, 2002, and 2004 mapped and sampled black smokers and other hydrothermal plumes that emanated from the numerous active chimneys. In late 2004, scientists dove four times on vent sites with the Japanese manned submersible Shinkai 6500, followed in 2005 by five dives with the American submersible Pisces V.

2007 report of investigations. The 2007 cruise (called the New Zealand American Submarine Ring of Fire 2007) represented a collaboration between the Geological and Nuclear Sciences?GNS (New Zealand), the Leibniz Institute for Sea Sciences at the University of Kiel ( das Leibniz-Institut f?r Meereswissenschaften an der Universit?t Kiel?IFM GEOMAR) (Germany), the National Oceanic and Atmospheric Administration's Ocean Exploration (NOAA-OE) program (USA), and the Woods Hole Oceanographic Institution (USA). Logs of the cruise, available on a NOAA website, and the paper by de Ronde and others (2005) provided much of the information for this preliminary report.

Bathymetric information was used to create an oblique relief image of the 350-m-high intracaldera cone with the caldera floor and walls in the background (figure 2). A hydrothermal area lies along the caldera's NW wall and hydrothermal chimneys were seen there (figure 3). Diffuse venting was also reported from the prominent and smaller cones.

The existence of active thermal features at Brothers also comes from observations of seawater turbidity (i.e., cloudiness of the water column, analogous to the plume in figure 3). Basically, areas of high turbidity signify hydrothermal venting (figure 4). In more detail, turbidity, when considered along with collateral data (such as seawater velocity over the ocean floor, electrical conductivity, temperature, and samples of water and rock) may provide clues about the strength, chemistry, and location of the hydrothermal venting.

Metal deposits. One goal of the 2007 expedition was to better understand hydrothermal venting and its relation to metal-bearing deposits at Brothers. Hydrothermal vents, which might be active for periods from months to decades, may contribute to mineral deposits along the Kermadec arc. Investigators developed a hypothetical diagrammatic cross section through Brothers presenting a model of its internal intrusive processes and thermal and hydrothermal evolution (de Ronde and others, 2005).

One submersible was a torpedo-like autonomous underwater vehicle known as the Autonomous Benthic Explorer (ABE), from Woods Hole Oceanographic Institution. ABE was intended to 'fly' above the surface of the crater in a grid pattern. ABE's instrumentation includes a fluxgate magnetometer, swath (wide-angle) bathymetry using multibeam sonar, and instruments to measure conductivity, temperature, depth, and water chemistry. ABE assesses its relationship to the sea floor to within several meters by using sonar and satellite guidance systems. Typically it operates ~ 25 m above the sea floor on a programmed path for up to 16 hours before surfacing to recharge its batteries.

The other submersible was a new remotely operated, tethered vehicle?the SeaQuest 6000. It connects to the ship by a fiber-optic cable, contains numerous instruments, and carries manipulator arms and video cameras. Available reports noted that on the cruise, SeaQuest 6000 examined previously identified seafloor features in more detail.

Geological Summary. The submarine Brothers volcano, located NE of the Healy submarine volcano, contains an oval-shaped summit caldera 3-3.5 km wide. The volcano is elongated in a NW-SE direction, and the high point of the dominantly dacitic volcano lies on the NW caldera rim at about 1350 m below the sea surface. The caldera floor is at about 1850 m depth, and a post-caldera lava dome was constructed on the southern caldera floor and partially merges with the southern caldera wall. Brothers volcano displays major submarine hydrothermal activity, including a large field of "black smoker" vents on the NW caldera wall and vents on the post-caldera dome.