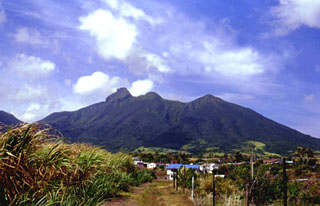 
An earthquake swarm in the vicinity of Mt. Liamuiga began on 24 October and had declined by early November.

Geological Summary. Mount Liamuiga volcano, comprising the NW end of St. Kitts Island, contains a steep-walled, 1-km-wide summit crater, which contained a shallow lake until 1959. Two lava domes are located on the upper W flank, and intrusion of a 3rd dome, Brimstone Hill, on the lower SW flank uplifted a Pleistocene limestone block. Liamuiga, sometimes referred to as Mount Misery, is the youngest of three NW-migrating volcanic centers on St. Kitts. Its most recent major eruptions less than 2,000 years ago produced pyroclastic flows and mudflows whose deposits underlie populated coastal areas. Reports of possible eruptions in 1692 and 1843 are considered uncertain. An earthquake swarm from late 1988 to early 1989 caused small landslides in the summit crater; another earthquake swarm took place in 1999-2000. Active fumaroles are found in the summit crater.