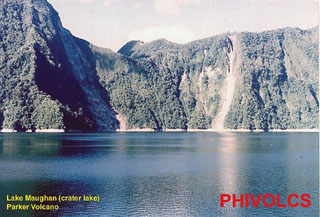 
PHIVOLCS staff dispelled concerns that Parker might erupt after a M 7.5 earthquake (according to the US Geological Survey NEIC) occurred near the volcano on 6 March at 0516. According to news articles, tremor caused a portion of the volcano's crater wall to breach and fall into Lake Maughan atop the volcano. Articles also stated that tons of water that were released from the lake washed away houses and about 33 families were evacuated from river banks below Lake Maughan due to fears that more of the lake would overflow. Government agencies plan to conduct an aerial inspection to assess the lake's water level.

Geological Summary. Parker volcano, also known locally as Falen, is a low, vegetated stratovolcano overlooking Sarangani Bay near the southern tip of Mindanao Island. The steep-sided, 1824-m-high andesitic-dacitic stratovolcano is surrounded by extensive, youthful pyroclastic-flow deposits that suggest parallels to Pinatubo volcano. The summit of Parker is truncated by a 2.9-km-wide caldera with steep-sided walls that rise 200-500 m above heart-shaped Maughan Lake. This volcano was unknown to most volcanologists until recent years, but it is now known to have been the source of a major explosive eruption in 1641 that was previously attributed to Awu volcano on Sangihe Island, Indonesia and caused darkness over the island of Mindanao. The 1641 eruption included the emplacement of voluminous pyroclastic flows and lahars and resulted in the formation of the summit caldera. This was the last of three major explosive eruptions from Parker during the last 3800 years.