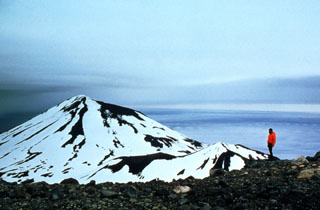 
AVO reported that the Concern Color Code at Korovin volcano was raised from Green to Yellow on 22 February due to an increase in seismicity at the volcano. Distinct seismic signals indicating unrest were recorded on 4 days between 17 and 22 January, with a sustained 11-minute-long seismic signal on 22 February. After 22 February, seismicity decreased and distinct seismic signals like those recorded earlier were not detected. Clouds obscured satellite views of the volcano after 22 February. A pilot report on the 22nd indicated that the summit area was obscured by clouds, and there were no signs of ashfall on the flanks and no steam plume above the volcano. No obvious signs of activity were seen on 23 February by observers in the village of Atka. AVO received no reports of volcanic activity and there were no indications that an eruption was imminent.