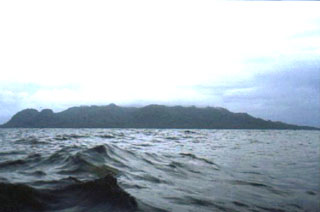 
According to a news source, residents on Savo in the Solomon Islands reported increased seismicity to authorities on 28 July. Two days later a team from the Geological Survey Division (GSD) and the National Disaster Management Office (NDMO) investigated the volcano. They saw steam-and-gas emissions rising from an area in the crater, possibly indicating an active fissure, and interviewed residents. The GSD briefed the National Disaster Operations Committee and other authorities on 31 July, confirming the increased seismicity, and prompting a preparedness response. Response actions included continuing to monitor the island, deploying technical teams, and issuing Volcano Safety Messages to inform residents of the island as well as in surrounding areas.

Geological Summary. The 6 x 7 km island of Savo consists of a forested andesitic-to-dacitic stratovolcano with a shallow, elliptical 1 x 1.5 km wide summit crater. Lava domes of historical age are located on the crater floor and its NE rim, and older domes occur on the flanks of the volcano. Pyroclastic flows and mudflows traveled down valleys from the summit crater to form debris fans along the coast. Thermal areas located in the summit crater, the south to SE flanks, and offshore include areas of steaming ground, fumaroles, small geysers, and hot springs. Spanish explorers arrived in 1568 during the first historical eruption of Savo. Pyroclastic flows during the climactic phase killed almost all inhabitants of the island, and oral traditions also note the expansion of the island on the northern side. Other eruptive episodes occurred during the mid-17th century and during the 1830s to 1840s.