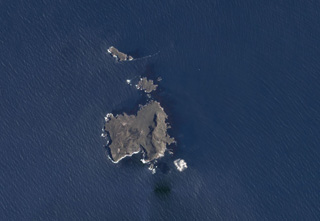 
According to a news report, a swarm of earthquakes occurred beneath Tristan da Cunha during the nights of 28 and 29 July. A scientist monitoring seismic activity from the Preparatory Commission for the Comprehensive Nuclear Test-Ban Treaty Organization, Vienna International Centre indicated that the main swarm lasted ~8 hours and occurred ~30 km below the volcano. After the swarm, there were a few individual earthquakes and then activity tapered off.

Geological Summary. Nightingale Island and the adjacent smaller Middle (or Alex) and Stoltenhoff Islands and associated small islets are the southernmost of the Tristan da Cunha island group. The heavily eroded island consists of early and late stage ash and agglomerate units with intervening massive trachytic intrusions and lava flows. Volcanic rocks were K-Ar dated at between 0.4 and 0.15 million years, and a radiocarbon date of about 39,000 yrs BP was obtained from an ash layer overlain by a lava flow. An earthquake swarm lasting 6 hours beginning on 29 July 2004 was followed by observation of large blocks of floating phonolitic pumice that washed up on Tristan da Cunha. The event was considered to have originated from an eruption associated with an earthquake swarm 37-53 km SSE of Tristan da Cunha on the submarine SE flank of Nightingale Island.