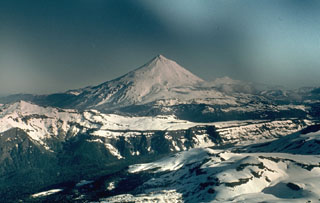 
Servicio Nacional de Geología and Minería (SERNAGEOMIN) Observatorio Volcanológico de Los Andes del Sur (OVDAS) reported that beginning at 1524 on 15 February a seismic swarm at Lanin, consisting of 59 volcanic-tectonic, long-period, and spasmodic tremor events, lasted for 45 minutes. The largest volcano-tectonic event was a M 1.8. The Alert Level was raised to Yellow (second highest level on a four-color scale); ONEMI declared an Alert Level Yellow (the middle level on a three-color scale) for the community of Curarrehue (32 km N).

Geological Summary. Lanín is a large conical late-Pleistocene to Holocene stratovolcano along the Chile-Argentina border. The dominantly effusive basaltic-to-trachydacitic volcano lies at the eastern end of a NW-SE-trending volcanic group beginning with Villarrica that is transverse to the Andean chain. The beautifully symmetrical, 3776-m-high Lanín rises 2500 m above its base; shoulder areas on the upper flanks hint at a buried caldera. The volcano was formed in four eruptive stages dating back to the early Pleistocene or late Pliocene. The last two stages occurred during the late-Pleistocene and Holocene. A small lava dome at the summit fed blocky lava flows to the north about 2200 years ago. Lanín was reported active after an earthquake in 1906, but Sapper (1917) stated that newspaper accounts are strongly disputed, and no historical eruptions are known. A postglacial tuff ring (Volcán Arenal) is located below the SW flank in Argentina. A younger lava flow from Lanín covers deposits of Volcán Arenal and extends south into Lago Paimún.