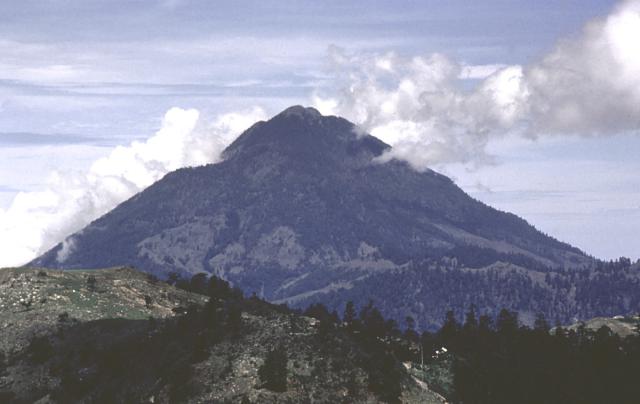 The Global Volcanism Program has no Weekly Reports available for Tacaná.

A series of shallow earthquakes centered within 20 km of Tacaná began 15-16 December and was continuing in early February. On 19 December, a magnitude 5 earthquake centered near Ixchiguan at 15.18°N, 91.99°W (about 15 km ENE of the volcano) caused minor damage to 60 adobe houses and a school built of reinforced concrete. This event was followed by a series of aftershocks that had ended by 30 January.

UNAM geologists from the UNAM visited the volcano in late January, finding no evidence of increased volcanic activity. A temperature of 9°C was measured at 20 cm depth in the summit lava dome. At Agua Caliente hot springs at the foot of the volcano, water temperatures were 50°C; temperature and water outflow rate have apparently remained unchanged for 50 years. A portable seismometer placed on the volcano's summit for 2 hours and at its base for 4 hours on 26 January recorded small earthquakes but no harmonic tremor.

On 3 February, another M 5 earthquake was recorded in the same area as the 19 December event. Moderate damage occurred to 500 adobe houses in the villages of Ixchiguan (18 km ENE of the summit of Tacaná), Calapte, Toacá (13 km NE of the summit), Sanajaba, Sibinal (7 km NE of the summit), Vega del Volcán, María Cecilia, and Toaman. Shocks of magnitudes 4.2, 3.0, and <3.0 followed. Some of the earthquakes had a NW-SE alignment in the Toacá-Ixchiguan area. Volcanic earthquakes were felt in Sibinal and rumbling was heard at the base of the volcano.

A joint INSIVUMEH/UNAM team recorded only volcanic earthquakes 3-7 February. However, [low-level] harmonic tremor began to appear on 8 February. [A signal that could be interpreted as] harmonic tremor strengthened the next day and seismicity was migrating around the volcano.

The series of shallow earthquakes near Tacaná was continuing in early March. Many of the shocks were felt near the volcano. There were no apparent changes to fumaroles on and around the volcano. To supplement permanent seismometers 30 km SW and 80 km N of the volcano (near Tapachula and Comitán), Mexican geophysicists installed portable instruments about 27 km NW of the volcano (at Motozintla), W of the volcano (at El Aguila) and about 6 km S of the summit (at Unión Juárez).

The majority of felt events were subduction zone earthquakes centered under the coast of northernmost Guatemala. Other events originated in a fault system NE of the volcano, in Guatemala. A third type consisted of events under the volcano, characterized by sharp P arrivals and very long S-wave trains, that were strong enough to be felt and heard within 10 km of the volcano. Apparent volcanic tremor episodes with amplitudes just above noise levels were recorded 2-3 times a day. The rate of seismic energy release increased substantially 18-25 February, declined significantly after 25 February, then started to increase again on 3 March. On 3 March between 0400 and 1200, a bubble tiltmeter 6 km S of the summit (at 1,800 m elevation) indicated a sharp deformation event corresponding to about 100 microradians of deflation on an azimuth of 073°. However, relevelling of a line extending 1 km N and 4 km S of the tiltmeter (including one station only a few tens of meters away) revealed no changes. On 10 March about 0200, seismic instruments detected several events that looked like explosion shocks, followed by about 2 minutes of very minor tremor. The events were felt and heard by many residents of towns around the volcano, but no eruption occurred. The government of the state of Chiapas, México has prepared a contingency plan to respond to several levels of volcanic risk, including evacuation of people within 15 km of the volcano if necessary.

A series of shallow earthquakes, many strong enough to be felt near the volcano, began in mid-December and continued through April.

The following is from Servando de la Cruz Reyna. "A volcanic earthquake swarm started in Tacaná volcano on 7 May at 1500. Earthquakes occurred at an average rate of 1/minute, accompanied by thunder-like noises that continued for 23 hours. On 8 May near noon, a moderate phreatic explosion opened a [20-m-diameter] vent that ejected a small amount of fine ash, partially destroying vegetation in an area 200 x 100 m. The vent is located on the upper NE flank (right on the México/Guatemala border) at about 3,800 m altitude [see also 11:09]. The seismic activity continued unchanged through 9 May, then started decreasing on 10 May to a rate of about one earthquake every 5 minutes that has persisted through 11 May. A white plume some 300 m high continued to be emitted as of 11 May. H2S has been qualitatively detected in the plume. No deformation changes have been detected on a bubble tiltmeter located about 1/3 of the way up the S flank. Dry tiltmeter measurements and radon counting are underway. The intensity of the swarm motivated the issuance of an orange alert at three levels (10, 15, and 20 km radius) effective on May 8." Press sources reported that 17,000 people, mostly residents of flank villages, had left their homes.

Since the small phreatic explosion on 8 May, vapor emission has continued. Steaming increased slightly from some older fumaroles, probably because of recent heavy rains. As of late May, about 2-3 fairly large and a dozen small tectonic events were recorded daily. About 90% of the shocks were very shallow and most epicenters were within 3 km of the vent. Seismicity had declined somewhat by mid-June, while deformation and temperatures of nearby hot springs remained stable.


Seismicity declines after May explosion; steaming

Seismicity declined after the 8 May phreatic explosion and in early June about 1-2 events were recorded/day. In late June, the active vent continually emitted steam, typically to about 500 m height, with a noise like a jet engine. The vent, about 20 m in diameter, was located at the foot of a 30-m cliff along an apparent radial fault extending from the summit. Poor access prevented direct gas sampling, but a weak odor of H2S was noted in the vicinity of the cloud. An apron of muddy, clay-rich debris surrounded the vent. Samples of February ejecta examined under a microscope were strongly altered. May and June material was less altered, but no glass was evident in any of the samples. Residents of the area who experienced the last activity in 1949-50 reported that the 1986 seismicity seemed stronger and the vent developed much more suddenly. The 1949-50 activity, on the upper SW flank, occurred from numerous small fumaroles rather than from a single vent and was apparently shorter-lived (Müllerried, 1951).

Vigorous monitoring efforts by scientists in México and Guatemala continue. Contingency plans have been prepared by the state government of Chiapas México, and a hazards assessment and map were produced under the auspices of Guatemala's INSIVUMEH (Rose and Mercado, 1986).


New fumaroles above 8 May crater

Geologists flew over Tacaná in early October. They noted that many small new fumaroles had formed in an area extending about 200 m above the level of the crater that formed on 8 May. The highest of the new fumaroles was also the largest, producing a white steam column 10-20 m high. The 8 May crater, at 3,400 m altitude (as measured by the aircraft altimeter) [but see 11:4], consisted of two vents about 8 and 12 m in diameter. Since May, the smaller vent has produced a white vapor column 200-300 m high. The larger vent was filled with water and had ceased emitting steam. Seismicity continued at a rather low level (similar to that of March). The geologists warned civil protection authorities from the state of Chiapas that unconsolidated material could form landslides when further loosened by the effect of the new fumaroles, and actions were being taken accordingly.

Three seismic swarms in the vicinity of Tacaná were recorded 20-28 January [see also 12:3]. Two began with magnitude 3 events. During a swarm that began 25 January, about 35 microearthquakes occurred/hour, with 750 events (M <1) recorded 25-26 January. The velocity model for the area remains uncertain, precluding precise hypocenter determinations, but events from the 25-26 January swarm appeared to be at 5-10 km depth. Geologists suspected that the seismicity may have been tectonic. No change in activity at the volcano has been reported.


January seismicity not recorded by other stations

Three apparent earthquake swarms were observed 20-28 January on seismic data from Sibinal, Guatemala, on Tacaná's E flank. However, no local activity was recorded during this period by a seismic station 6.3 km away (in México), although two fairly large distant events were well-registered by both stations, sited on the same rock type with similar gain settings. Although the signals on the Sibinal records could be interpreted as microtremors, Mexican seismologists who have looked at the records believe that they may be the result of telemetry noise.

On 11 April a team of Italian scientists inspected the craters and fumaroles produced by the explosion. A steam column more than 100 m high was being emitted, but total steam output appeared to have decreased. The largest fumarole had a temperature of 89.3°C. Analysis of samples from that fumarole gave the following results (in volume percent): CO2, 1.07; H2O, 98.7; H2S, 0.15; N2, 0.019; H2, 0.00082; CH2, 0.00015; NH4, 0.000037; B, 0.00020; O2, 0.000016. The volcanologists interpreted the composition as resulting from the interaction of a convective flow of deep origin with a shallow aquifer. This interpretation appeared to correlate with the mainly phreatic character of the more recent activity, inferred from the deposits. The scientists felt that phreatic explosions of weak intensity could provide a sufficient trigger for dangerous landslides because of the volcano's steep slopes.

Seismic activity continued in May and June at about the same level as in previous months. Seismic station SBG, 6 km E of the summit, recorded 40 microearthquakes in May and 30 in June with S-P <= 2.0 seconds. Gas emission continued at the fumarolic vent formed by the 8 May 1986 phreatic eruption. A small lake was seen inside the vent by an INSIVUMEH team during their November 1986 visit.

During July, the SBG seismic station registered 20 microearthquakes with S-P <= 2.0 seconds. There have been no recent reports about the state of the vent formed by the 8 May 1986 phreatic eruption.


There is no Deformation History data available for Tacaná.


There is no Emissions History data available for Tacaná.


There are no samples for Tacaná in the Smithsonian's NMNH Department of Mineral Sciences Rock and Ore collection.