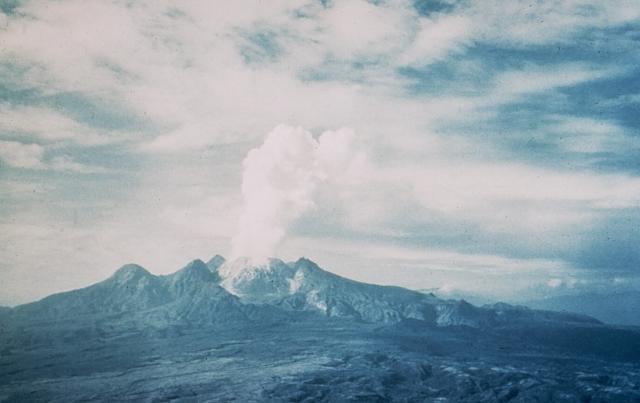 
The Darwin VAAC stated on 24 April that reports of an eruption at Lamington on 22 April were false. Based on information from Geoscience Australia and satellite imagery, the Darwin VAAC originally reported that an E-drifting ash cloud from Lamington seemed to be evident on satellite imagery on 22 April at 1741. Thunderstorms near the volcano made it difficult to locate possible ash on satellite imagery. On 23 April at 1135 a flight service reported that no volcanic activity was observed at Lamington. A team from the Rabaul Volcano Observatory is investigating rumors of activity at the volcano.

"A brief aerial and ground inspection was carried out at the summit on 12 October. Most of the 1951 summit crater dome had a dense canopy of vegetation, broken only by a number of thermal areas scattered around the summit. Weak vapour emission was noted from fumaroles. Temperatures were measured in one of the larger thermal areas; the highest reading was 93°C. In 1973, the highest temperature recorded in the same thermal area was 362°C. This temperature decrease is consistent with the visual impression of declining activity. Seismic surveillance from a station near the summit was suspended in 1989; measurements in November revealed no volcanic seismicity."

The instrumented, yet now-quiet Mount Lamington resides on the SE peninsula of the main island of Papua New Guinea. It lies roughly across that peninsula from the capital city of Port Moresby and 40 km inland from the Solomon Sea. Lamington's summit contains ragged peaks and a U-shaped crater open to the N. The volcano is ~21 km SSW of Popondetta Town, the provincial center for Oro Province. Lamington does not erupt frequently like Manam and Ulawun, but had a single historical eruption of such magnitude that, if repeated, could be catastrophic for the more than 30,000 people who live nearby.

About fifty years ago, on 21 January 1951, a major explosive eruption at Lamington killed ~3,000 people, the most of all historical volcanic eruptions in Papua New Guinea. Before the 1951 eruption, Lamington was not known to be a volcano. The group of mountains where the volcano stands was covered in thick jungle and there were no stories to suggest that eruptions had occurred before. As documented in a classic study by Taylor (1958), the paroxysmal eruption was not a sudden happening, but had begun several days earlier when nearby residents started to see changes in the summit area. The pyroclastic flow from the eruption devastated an area of ~200 km2, forming a radial pattern around the volcano that extended slightly farther on the N side. Two photos illustrating aspects of the eruption appear in figures 1 and 2. One of the hallmarks of Taylor's study was his well-developed timelines that clearly stated the sequence of events.

Hastily arranged monitoring commenced immediately after the 1951 eruption but only operated during the active phase of the eruption. A more permanent monitoring program began in 1970 with the installation of a seismograph. In October 1996, a modern seismic station and an electronic tiltmeter were installed on Lamington.

Currently RVO has permanent, smaller observatories at Lamington, as well as at Ulawun, Langila, Karkar, Manam, and Esa'ala. Each is equipped with a recording seismograph. In addition, the stations at Lamington, Ulawun, Karkar, and Manam contain real-time high-frequency data-transmission systems that allow RVO volcanologists to remotely monitor those sites.

Since the 1951 eruption, seismic activity has been absent to rare. Seismic records on 21 December 2000 and 17 February 2001 showed several hours of very high seismicity, but it was difficult to ascertain the cause.


Rumors of volcanism in April 2002 were false

During most of April 2002, residents of Popondetta Town, ~21 km NNE of Lamington, and villages near the volcano were besieged by rumors of the volcano showing signs of renewed activity. Later investigations found no evidence of volcanism. Some of the rumors included fire and "smoke" from the volcano, felt earthquakes, and noises. As a result of the rumors, a couple of schools closed, some residents buried their belongings for safekeeping, and others prepared to evacuate. At the time it was difficult for the Rabaul Volcano Observatory (RVO) to confirm or deny the reports because the monitoring equipment for Lamington had not been operating since October 2001.

Based on information from Geoscience Australia and satellite imagery, the Darwin VAAC reported that an E-drifting ash cloud from Lamington seemed to be evident on satellite imagery on 22 April at 1711. The height of the cloud was not known due to thunderstorms in the area making it difficult to detect ash. However, on 23 April at 1105 a flight service reported that no volcanic activity was evident at Lamington. By 26 April Darwin VAAC had concluded that the suspicious cloud was not related to volcanism.

Investigations by the Geological Survey of PNG (RVO and PMGO) of the Department of Mining were carried out during 21-25 April (courtesy of funding from AusAID). On 28 April 2002, RVO reported that, after 3-4 weeks of rumor and speculation suggesting Lamington was showing signs of renewed volcanic activity, none had occurred. Monitoring equipment was restored during the trip, and seismic recordings during those few days showed no seismicity. A very brief aerial inspection of the summit area showed no concrete evidence of renewed volcanic activity. There were no changes in the topographical features or vegetation to indicate recent activity. Small amounts of vapor were being emitted from a few fumarole locations, but that activity was not a new development. There have been no additional reports of unusual activity or increased seismicity through February 2003.

The Rabaul Volcanological Observatory reported that Lamington remained quiet over the period 25 June-9 October 2003. Vapor emissions were difficult to observe because of the distance to the observation point, but on a few clear days very small volumes of thin white vapor were seen in the summit area. The report also noted that high-frequency volcano-tectonic-like earthquakes began in early July at a rate of up to five events per day and continued into early October. This is the first time since the seismic station was re-established in 1997 that these types of earthquakes have been recorded in significant numbers over a short period of time.

Lamington remained quiet during 10 October-14 December 2003. Cloud cover over the summit area made visual observations difficult, and the earthquake recorder did not function due to technical problems. Although it was difficult to make a reliable prognosis based on very limited data and information, Rabaul Volcano Observatory expected Lamington to remain quiet.


There is no Deformation History data available for Lamington.


There is no Emissions History data available for Lamington.


There are no samples for Lamington in the Smithsonian's NMNH Department of Mineral Sciences Rock and Ore collection.