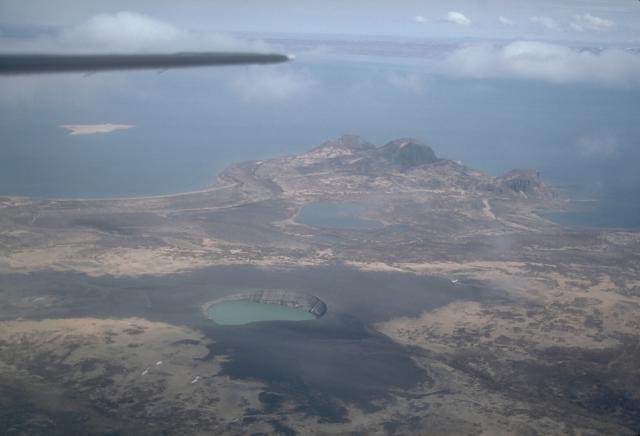 During the last week of May, the anomalous seismic activity under SW Lake Becharof (BGVN 23:04) continued but at a decreased rate and intensity; magnitudes of 12 located earthquakes ranged from M 1.7 to 3.3. During 1-5 June, 20 earthquakes were located ranging from M 1.8 to 4.3. Activity decreased significantly during 6-12 June; only four earthquakes were located, all M > 3.0. Several overflights of the location by AVO scientists revealed no signs of volcanic activity or surface breakage. The area of seismicity was not monitored by real-time seismic instrumentation; however, a portable seismic instrument has recently been installed. AVO is in communication with local citizens and land managers who frequently overfly the area. There was no evidence of imminent hazard at the site.

The Global Volcanism Program has no Weekly Reports available for Ukinrek Maars.

On 30 March, explosions were reported at 1500 and 1720 from a vent 13 km [but see 2:4] NW of Peulik volcano. The latter explosion was viewed from close range from a Wien Air Alaska plane. Its crew reported that the dense, ash-laden eruption cloud rose higher than 6,000 m. Peulik, an 1,844-m stratovolcano with a dacite lava dome, last erupted in 1852. It is surrounded by several small olivine andesite scoria cones.

On 2 April, the original crater had filled with water and become quiescent, and a new 60-m-diameter vent had formed 500 m to the E. By the early afternoon of 3 April, the E crater had grown to about 100 m in diameter and contained a yellowish-orange lava lake. Fragments up to 1 m across were being ejected to 300 m height. Later in the afternoon, 15-20-m lava fountains were observed.

An ash cloud rising more than 4,000 m deposited traces of ash 95 km to the N on 5 April, but by 6 April activity had declined to steam emission and some ash explosions, which sent tephra to more than 1,000 m above the lava lake. Similar activity, including 30-m orange-red lava fountains, was reported on 7 April. No further eruptions were reported until the early morning of 9 April, when violent explosions of incandescent material were seen 30 km away.

A team of volcanologists from the University of Alaska and Dartmouth College visited the eruption site 14-21 April. The W crater was oblong (150 x 65 m) and filled with lukewarm, slightly acidic water. The E crater was about 250 m in diameter and 100 m deep. About 2/3 of its floor was occupied by a lava dome up to 40 m high that was degassing and was coated with sulfur and hematite. Ground water emerged from the crater walls at 50-70 m depth and cascaded onto the dome, where it flashed to steam. Occasional ash puffs were created by the caving of the steep crater walls. Blocks and boulders of highly variable composition and various degrees of rounding, and olivine basalt bombs with lithic cores, decreased in size from 1.5 m in diameter near the crater rims to about 50 cm diameter a few hundred meters away. Fist-sized cinders fell as far as 2 km away. Stripped bark, and mud with imbedded scoria plastered against tree trunks 500 m from the vents, indicate at least minor base surge activity during 1 or more explosions of the E crater.

Two portable short-period seismograph systems, which operated from 15-20 April, recorded a high level of microearthquake activity and three distinct earthquake swarms of several hours duration. More than 1 event per minute was recorded during the swarms. Many of the smaller events were shallow, but some of the larger ones showed S-P times indicating hypocenter depths between a few km and 20 km. Some of the larger events were also recorded by a permanent University of Alaska seismic station 25 km N of the eruption site.

When visited in late May, the E vent was filling with water. A glow could be seen through fractures in the E vent dome, which had ceased growing and was degassing less vigorously than in mid-April. The vents are located on the Bruin Bay Fault. Its projected trend cuts an area of about 12 new hot springs that have formed about 3 km to the N in Becharof Lake. Periodic earthquake swarms continued to occur in the vicinity of the new vents. A third seismograph station was added in late May to the two installed in April.

During 8-9 May, a seismic swarm of tectonic earthquakes shook the middle Alaskan Peninsula region including the towns of King Salmon, Dillingham, Egegik, and Pilot Point. The swarm began with five earthquakes of M 5.2-4.7 occurring between 1630 and 2259. Dozens of earthquakes in the M 2.5-3.5 range were felt locally. The earthquakes continued through 9 May, but the number of earthquakes had decreased notably by the morning of 10 May. Felt earthquakes were still occurring at a rate of 1-2/day as of the afternoon of 12 May.

The earthquakes were clustered on the SW shore of Lake Becharof, approximately 10-20 km NW of the 1977 Ukinrek Maars volcanoes and near the S end of the Bruin Bay fault. The earthquakes were all very shallow (<7 km in depth). In the past, the few local seismic stations have been able to accurately locate earthquakes only of magnitudes greater than M 4. The recent expansion of Alaska Volcano Observatory (AVO) volcano seismic monitoring to include volcanoes in Katmai National Park, NE of Lake Becharof, and Aniakchak Volcano, to the SW, has allowed better detection and location of Becharof earthquakes.

AVO scientists traveled to King Salmon on 9 May for an overflight of the swarm location and vicinity. Their U.S. Fish and Wildlife Service (FWS) pilot had overflown the area the evening of 8 May after the first earthquakes. Nothing indicating any volcanic activity or surface breakage was seen on either flight. Some small slumping was noticed along the SW shoreline of Lake Becharof and some local discoloration by sediments was seen both likely resulting from ground shaking. Similarly, a slight change in the green coloration of the crater lake in the large maar at Ukinrek Maars was likely due to disturbed sediments. No evidence of any disturbance or unusual activity was seen at Peulik volcano. Peulik is heavily snow-covered and showed no sign of discoloration, deformation, or slumping. The area of seismicity is not monitored by real-time seismic instrumentation; scientists scouted for possible locations to establish a temporary seismic net. The net will allow scientists to determine if there is a volcanic component to the earthquake swarm and any potential volcanic hazard. AVO is also in communication with citizens of King Salmon, Egegik, Meshik, and Pilot Point, as well as the National Park Service and FWS pilots who frequently overfly the area.

The preliminary interpretation is that the swarm was of tectonic origin, although the occurrence of five M 4.7-5.2 earthquakes in such a short time with no clear mainshock may suggest a volcanic component. Considering the nature of the formation of Ukinrek Maars in 1977, where no volcano existed previously, intrusion of magma associated with tectonic movement is possible. There is no evidence of imminent volcanic hazard from this seismic swarm.

Background. The May 1998 swarm was the most energetic to date. There were no major seismic events detected in association with the 1977 Ukinrek Maars eruptions, except for a number of small events detected by a portable seismic net which was deployed by the University of Alaska at Fairbanks (UAF) and the U.S. Geological Survey (USGS) for several months following the 1977 eruptions. Ukinrek Maars formed 30 March-10 April, 1977 as a result of magmatic intrusion into water-saturated glacial till 2 km S of Gas Rocks on the S shore of Lake Becharof. During a 10-day period, violent explosions produced steam and ash plumes as high as 6.5 km and light ash fall as far as 160 km to the N. Since the Ukinrek Maars formed, CO2 gas has been continuously emitted from the vicinity of the maars, the Gas Rocks, and from beneath Lake Becharof.

During the last week of May, the anomalous seismic activity under SW Lake Becharof (BGVN 23:04) continued but at a decreased rate and intensity; magnitudes of 12 located earthquakes ranged from M 1.7 to 3.3. During 1-5 June, 20 earthquakes were located ranging from M 1.8 to 4.3. Activity decreased significantly during 6-12 June; only four earthquakes were located, all M > 3.0. Several overflights of the location by AVO scientists revealed no signs of volcanic activity or surface breakage. The area of seismicity was not monitored by real-time seismic instrumentation; however, a portable seismic instrument has recently been installed. AVO is in communication with local citizens and land managers who frequently overfly the area. There was no evidence of imminent hazard at the site.


There is data available for 2 Holocene eruptive periods.


There is no Deformation History data available for Ukinrek Maars.


There is no Emissions History data available for Ukinrek Maars.


There are no samples for Ukinrek Maars in the Smithsonian's NMNH Department of Mineral Sciences Rock and Ore collection.