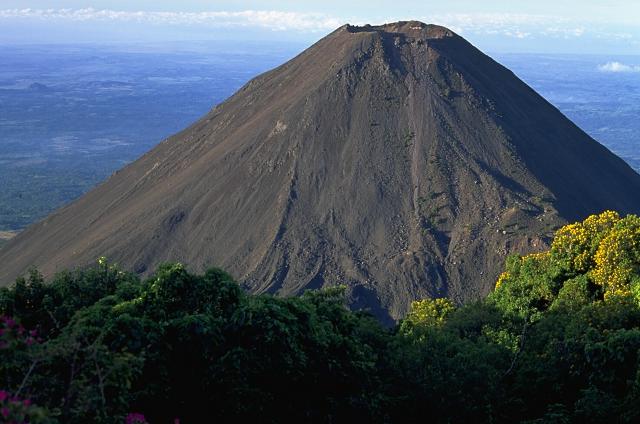 The Global Volcanism Program has no Weekly Reports available for Izalco.

Remote infrared thermal patterns have been measured on the northeast flank . . . four times since December 1969. The sensor station is on Cerro Cerde at a distance of 1,100 m from Izalco. On 7 July 1973, a thermal anomaly appeared near the summit in a region that had been thermally inactive in earlie infrared studies. The anomaly stretched downslope about 50 m and covered an area about 1,000 m2. The highest of the anomalous apparent surface etemperatures was 15°C, 2° above ambient. Data just processed from the 24 November 1973 observations show the anomaly expanded to the east to cover about 5,000 m2. The most intense apparent surface temperatures occur in the same spot as the earlier pattern and register 19°C, 8° above ambient. The anomaly was intensified. The appearance and intensification of a thermal anomaly at Izalco indicates a change in the thermal regime of the volcano. The temperatures of the summit fumaroles were not unusually high in December 1973. The concentration of intermediate-depth earthquakes just south of Izalco was unusually high for the period 1971-72, as compared to 1967-70. Geophysical observations of these anomalous events are continuing.

Izalco last erupted in October-November 1966, with a lava flow from its south flank. Prior to that it had undergone intermittent lava and pyroclastic eruptions from 1770 to 1956, building up a composite cone 650 m above its base.

During fieldwork on Santa Ana volcano in February, increased steaming was observed at the summit of Izalco relative to levels of previous years. Strong fumarolic activity occurred along the entire circumference of the 250-m-wide summit crater, with the exception of the NE side facing Cerro Verde. Activity was most vigorous at a vent on the N side of the crater floor, but was also strong along much of the inner rim of the crater and along its outer flanks. Steaming was observed over broad areas on the outer southern flanks to ~50 m below the rim, and on the W flank immediately N of a shoulder of the cone at ~1,800 m elevation, roughly 150 m below the summit. Activity had earlier been noticed to have increased in November 1998 following Hurricane Mitch. Most of the steaming was water vapor, and the increased activity was attributed to saturation of the still-warm cone by heavy rains accompanying the hurricane.


There is data available for 54 Holocene eruptive periods.


There is no Deformation History data available for Izalco.


There is no Emissions History data available for Izalco.


The following 9 samples associated with this volcano can be found in the Smithsonian's NMNH Department of Mineral Sciences collections, and may be availble for research (contact the Rock and Ore Collections Manager). Catalog number links will open a window with more information.