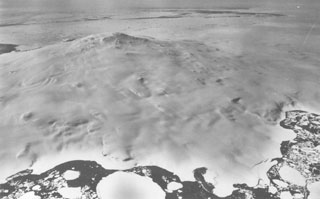 
Infrared imagery from the Metop satellite showed a possible rising steam plume from the area of Siple on 20 June. The imagery, as interpreted by Mark Drapes, indicated that the volcano was about -22 degrees Celsius, about 6 degrees warmer that the surrounding landscape, and the base of the plume was about -55 degrees Celsius. [Correction: Further investigation and/or analysis of satellite imagery by Philip Kyle (New Mexico Institute of Mining and Technology), Paul Morin (University of Minnesota), and Matthew Lazzara (University of Wisconsin) confirmed that an eruption did not occur.]

Geological Summary. Mount Siple is a youthful-looking shield volcano that forms an island along the Pacific Ocean coast of Antarctica's Marie Byrd Land. The massive 1,800 km3 volcano is truncated by a 4-5 km summit caldera and is ringed by tuff cones at sea level. Its lack of dissection in a coastal area more susceptible to erosion than inland volcanoes, and the existence of a satellite cone too young to date by the Potassium-Argon method, suggest a possible Holocene age (LeMasurier and Thomson 1990). Its location on published maps is 26 km NE of the actual location. A possible eruption cloud observed on satellite images on 18 September and 4 October 1988 was considered to result from atmospheric effects, after low-level aerial observations revealed no evidence of recent eruptions.