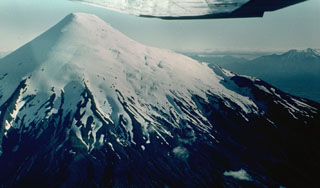 
Servicio Nacional de Geología and Minería (SERNAGEOMIN) Observatorio Volcanológico de Los Andes del Sur (OVDAS) raised the Alert Level for Osorno to Yellow (the second lowest level on a four-color scale) on 8 May, due to a gradual increase in the number and magnitude of seismic events recorded during 1-30 April. Earthquakes were concentrated on the NNW flank. The largest of the 294 total events was a M 3, located 2 km NW of the crater at a depth of 3.3 km.

Geological Summary. The symmetrical, glacier-clad Osorno volcano forms a renowned landmark that towers over Todos los Santos and Llanquihué lakes. It was constructed over a roughly 250,000-year-old eroded stratovolcano, La Picada, that has a mostly buried 6-km-wide caldera. La Picada underlies Osorno on the NE and has postglacial maars and scoria cones. The 2652-m-high dominantly basaltic to basaltic-andesite Osorno is one of the most active volcanoes of the southern Chilean Andes, and contains two small dacitic lava domes on the NW and SSE flanks. Flank scoria cones and fissure vents, primarily on the west and SW sides, have produced lava flows that reached Lago Llanquihué. Frequent explosive eruptions including pyroclastic flows and surges have occurred during the past 14,000 years. Historical eruptions have originated from both summit and flank vents, producing basaltic and andesitic lava flows that have entered both Llanquihué and Todos los Santos lakes.