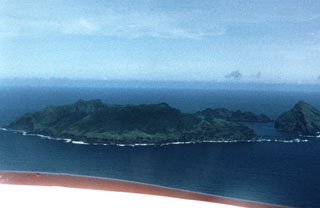 
A six-member team of USGS volcanologists visited the Commonwealth of the Northern Mariana Islands 11-27 May 1992 at the request of the CNMI Office of Civil Defense. Aerial observations [of Maug] on 13 May revealed no signs of steaming or other evidence of recent volcanic activity.

Geological Summary. Three small elongated islands up to 2.3 km long mark the northern, western, and eastern rims of a largely submerged 2.5-km-wide caldera. The highest point of the Maug Islands reaches only 227 m above sea level; the submerged southern notch on the caldera rim lies about 140 m below sea level. The caldera has an average submarine depth of about 200 m and contains a twin-peaked central lava dome that rises to within about 20 m of the sea surface. The Maug Islands form a twin volcanic massif with Supply Reef, about 11 km N. The truncated inner walls of the caldera on all three islands expose lava flows and pyroclastic deposits that are cut by radial dikes; bedded ash deposits overlie the outer flanks of the islands. No eruptions are known since the discovery of the islands by Espinosa in 1522. The presence of poorly developed coral reefs and coral on the central lava dome suggests a long period of general quiescence, although it does not exclude mild eruptions (Corwin, 1971). A 2003 NOAA expedition detected possible evidence of submarine geothermal activity.