The Smithsonian's "Eruptions, Earthquakes, & Emissions" web application (or "E3") is a time-lapse animation of volcanic eruptions and earthquakes since 1960. It also shows volcanic gas emissions (sulfur dioxide, SO2) since 1978 — the first year satellites were available to provide global monitoring of SO2. The eruption data are drawn from the Volcanoes of the World (VOTW) database maintained by the Smithsonian's Global Volcanism Program (GVP). The earthquake data are pulled from the United States Geological Survey (USGS) Earthquake Catalog. Sulfur-dioxide emissions data incorporated into the VOTW for use here originate in NASA's Multi-Satellite Volcanic Sulfur Dioxide L4 Long-Term Global Database. Please properly credit and cite any use of GVP eruption and volcano data, which are available via a download button within the app, through webservices, or through options under the Database tab above. A citation for the E3 app is given below.

Clicking the image will open this web application in a new tab. 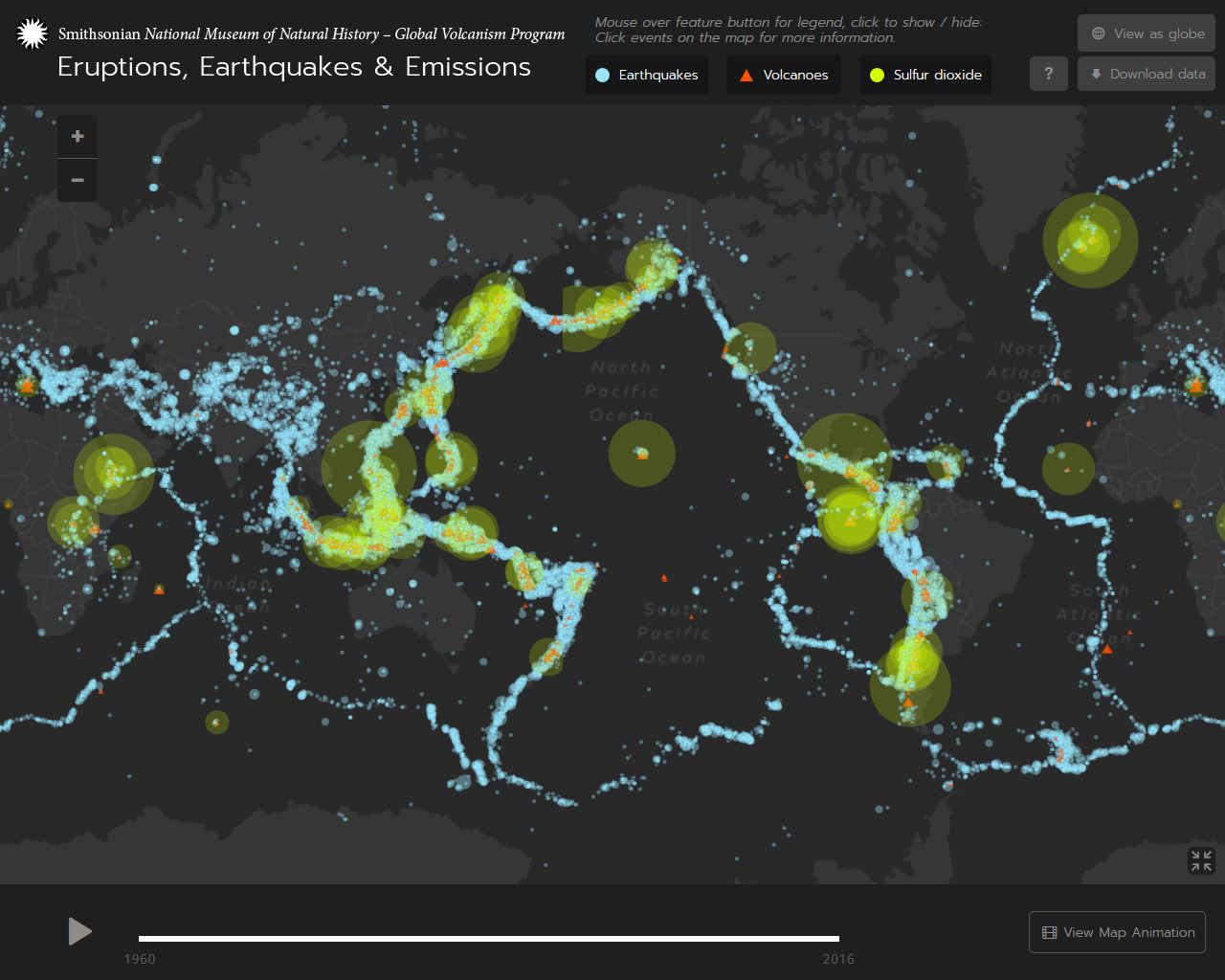 What is the Volcanic Explosivity Index (VEI)?

VEI is the "Richter Scale" of volcanic eruptions. Assigning a VEI is not an automated process, but involves assessing factors such as the volume of tephra (volcanic ash or other ejected material) erupted, the height the ash plume reaches above the summit or altitude into the atmosphere, and the type of eruption (Newhall and Self, 1982). VEIs range from 1 (small eruption) to 8 (the largest eruptions in Earth's entire history).


What about eruptions before 1960?

For information about volcanic eruptions before 1960, explore the GVP website, where we catalog eruption information going back more than 10,000 years. This E3 app only displays eruptions starting in 1960 because the catalog is much more complete after that date. For most eruptions before the 20th century we rely on the geologic record more than historical first-hand accounts — and the geologic record is inherently incomplete (due to erosion) and not fully documented.


What are "SO2 emissions" and what do the different circle sizes mean?

The E3 app displays emissions of sulfur dioxide gas (SO2) from erupting volcanoes, including the mass in kilotons. Even though water vapor (steam) and carbon dioxide gas (see more about CO2 below) are much more abundant volcanic gases, SO2 is the easiest to detect using satellite-based instruments, allowing us to obtain a global view. There is no universally accepted "magnitude" scale for emissions; the groupings presented here were chosen to best graphically present the relative volumes based on available data.


What am I seeing when I click on an SO2 emission event?

You are seeing a time-lapse movie of satellite measurements of SO2 associated with a particular emission event. These SO2 clouds, or plumes, are blown by winds and can circle the globe in about a week. As plumes travel, they mix with the air, becoming more dilute until eventually the concentration of SO2 falls below the detection limit of satellites. Earth's entire atmosphere derives from outgassing of the planet — in fact, the air you breathe was once volcanic gas, and some of it might have erupted very recently!


Why don't you include H2O and CO2 emissions?

The most abundant gases expelled during a volcanic eruption are water vapor (H2O in the form of steam) and carbon dioxide (CO2). Sulfur dioxide (SO2) is typically the third most abundant gas. Hydrogen gas, carbon monoxide and other carbon species, hydrogen halides, and noble gases typically comprise a very small percentage of volcanic gas emissions. So why can't we show H2O and CO2 in the E3 app? Earth's atmosphere has such high background concentrations of H2O and CO2 that satellites cannot easily detect a volcano's signal over this background "noise." Atmospheric SO2 concentrations, however, are very low. Therefore volcanic emissions of SO2 stand out and are more easily detected by satellites. Scientists are just beginning to have reliable measurements of volcanic carbon dioxide emissions because new satellites dedicated to monitoring CO2 have either recently been launched or have launches planned for the coming decade.


How much carbon is emitted by volcanoes?

We don't really know. CO2, carbon dioxide, is the dominant form of carbon in most volcanic eruptions, and can be the dominant gas emitted from volcanoes. Humans release more than 100 times more CO2 to the atmosphere than volcanoes (Gerlach, 2011) through activities like burning fossil fuels. Because of this, the background levels of CO2 in the atmosphere have risen to levels that are so high (greater than 400 parts per million, or 0.04%) that satellites cannot easily detect the CO2 from volcanic eruptions. Scientists are able to estimate the amount of carbon flowing from Earth's interior to exterior (the flux) by measuring carbon emissions directly at volcanic vents and by measuring the carbon dissolved in volcanic rocks. Scientific teams in the Deep Carbon Observatory (one of the supporters of E3) are working to quantify the flux of carbon from Earth's interior to exterior.


Do volcanic emissions cause global warming?

No, not in modern times. The dominant effect of volcanic eruptions is to cool the planet in the short term. This is because sulfur emissions create aerosols that block the sun's incoming rays temporarily. While volcanoes do emit powerful greenhouse gases like carbon dioxide, they do so at a rate that is likely 100 times less than humans (Gerlach, 2011). Prior to human activity in the Holocene (approximately the last 10,000 years), volcanic gas emissions did play a large role in modulating Earth's climate.


Volcanic eruptions and earthquakes seem to occur in the same location. Why?

Eruptions and earthquakes occur at Earth's plate boundaries — places where Earth's tectonic plates converge, diverge, or slip past one another. The forces operating at these plate boundaries cause both earthquakes and eruptions. For example, the Pacific "Ring of Fire" describes the plate boundaries that surround the Pacific basin. Around most of the Pacific Rim, the seafloor (Earth's oceanic crust) is "subducting" beneath the continents. This means that the seafloor is being dragged down into Earth's interior. You might think of this as Earth's way of recycling! In this process, ocean water is released to Earth's solid rocky mantle, melting the mantle rock and generating magma that erupts through volcanoes on the continents where the plates converge. In contrast, mid-ocean ridges, chains of seafloor volcanoes, define divergent plate boundaries. The Mid-Atlantic Ridge that runs from Iceland to the Antarctic in the middle of the Atlantic Ocean is one example of a divergent plate boundary. Earth's crust is torn apart at the ridge, as North and South America move away from Europe and Africa. New lava erupts to fill the gap. This lava cools, creating new ocean crust. All these episodes where solid rock collides or is torn apart generate earthquakes. And boom! You have co-located eruptions and earthquakes. To learn more about plate margins using E3, watch this video.


Is this the first time eruptions, emissions, and earthquakes have been animated on a map?

E3 is a successor to the program Seismic/Eruption developed by Alan Jones (Binghamton University). That program was one of the first to show the global occurrence of earthquakes (USGS data) and eruptions (GVP data) through space and time with animations and sound. The program ran in the Smithsonian's Geology, Gems, and Minerals Hall from 1997 to 2016, and was also available on the "Earthquakes and Eruptions" CD-ROM. E3 builds upon Seismic/Eruption with the addition of emissions data and automated data updates.


How many eruptions and emissions are shown, and from how many volcanoes?

The application is currently showing 2,120 eruptions from 333 volcanoes. It is also showing 360 emission activity periods from 118 different volcanoes. In addition, there are 67 animations available showing the movement of SO2 clouds from 44 volcanoes.


How often do you update the data represented in the web application?

The application checks for updates once a week. Earthquake data, being instrumentally recorded, is typically very current. Eruption data, which relies on observational reports and analysis by GVP staff, is generally updated every few months; however, known ongoing eruptions will continue through the most recent update check. Emissions data is collected by satellite instruments and also must be processed by scientists, so updates will be provided as soon as they are available following an event, on the schedule with eruption updates.


Is my computer system/browser supported? Something isn't working right.

To run the map, your computer and browser must support WebGL. For more information on WebGL, please visit https://get.webgl.org to test if it should work.