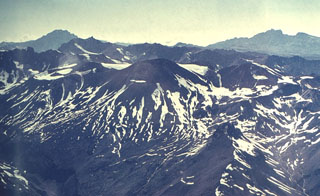 
On about 15 January 1994, Bolivar Miranda, a SERNAGEOMIN chemical engineer, observed a 5-km-high explosive column rising above Tinguiririca from a location 65 km W. A photograph taken by his son, Matías, showed a distinct white cauliflower-shaped column on a clear day. Based on the shape and growth of the column, this eruption was most likely phreatic.

Geological Summary. Tinguiririca is composed of at least seven Holocene scoria cones W of the Chile-Argentina border constructed along a NNE-SSW fissure over an eroded Pleistocene stratovolcano. The complex was constructed during three eruptive cycles dating back to the middle Pleistocene. The latest activity produced a series of youthful small stratovolcanoes and craters, of which the youngest appear to be Tinguiririca and Fray Carlos. Constant fumarolic activity occurs within and on the NW wall of the summit crater. Hot springs and fumaroles with sulfur deposits are found on the W flanks of the summit cones. A single historical eruption was recorded in 1917.