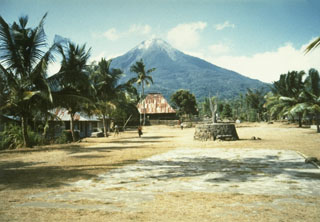 
CVGHM reported that observers at Ebulobo's observation post in Ekowolo (Boa Wae District) noted that during August white plumes rose as high as 30 m. Volcanic tremor was detected starting on 10 August. At night during 21-23 August incandescence was visible on the N side of the summit (incandescence was last observed in 2011). The Alert Level was raised to 2 (on a scale of 0-4) on 23 August. Residents and tourists were not permitted within a 1.5-km-radius of the crater.

Geological Summary. Ebulobo, also referred to as Amburombu or Keo Peak, is a steep-sided symmetrical stratovolcano in central Flores Island. The Watu Keli lava flow traveled down the N flank to 4 km from the summit in 1830, the first of only four recorded historical eruptions of the volcano.