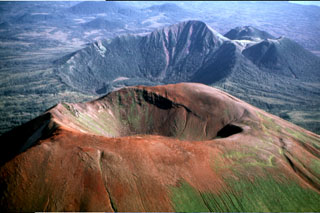 
AVO stated that a seismic swarm beneath Kruzof Island near Edgecumbe that began at about 0200 on 11 April had declined to background levels by 22 April. The swarm prompted an in-depth analysis of satellite data which spanned the last 7.5 years. The data showed that a broad area of uplift, about 17 km in diameter, was located about 2.5 km E of Edgecumbe. The uplift began in August 2018 and deformed at a rate of up to 8.7 cm per year in the center of the area, totaling 27 cm of uplift; the deformation was ongoing. Retrospective analysis of seismic data revealed that earthquakes started occurring in 2020, though the recent swarm was unusual. The deformation and seismic data together suggested magma movement beneath the volcano, consistent with an intrusion at about 5 km below sea level. The closest seismic station to the volcano was on Sitka, 24 km E; both the Volcano Alert Level and Aviation Color Code remained at Unassigned due to the lack of dedicated, local instrumentation.

Geological Summary. The Edgecumbe volcanic field covers about 260 km2 of Kruzov Island west of Sitka in SE Alaska. The basaltic-to-dacitic field is dominated by the large composite cones of Mount Edgecumbe, Crater Ridge, and Shell Mountain. This Pleistocene-to-Holocene system is 16 km E of the Queen Charlotte-Fairweather transform fault separating the North American and Pacific plates. Mount Edgecumbe is a stratovolcano with a well-defined crater, and is the largest edifice of the field. Crater Ridge is truncated by a 1.6-km-wide, 240-m-deep caldera. These and other vents are oriented along a SW-NE line. Volcanic activity originated about 600,000 years ago along fissures cutting Kruzof Island. A series of major silicic explosive eruptions took place about 9,000-13,000 radiocarbon years ago. The latest dated eruptions were phreatomagmatic explosions during the mid-Holocene, and all postglacial activity has been pyroclastic. Reports of historical eruptions are unsubstantiated.