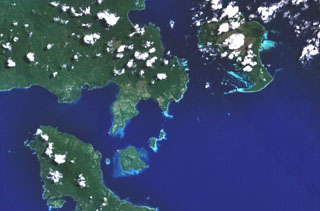 
"A swarm of earthquakes took place in the Esa'Ala area in mid-December 1989. Earthquakes were felt with intensities MM III-V by villagers at Esa'Ala, Dobu Island, and on SE Fergusson Island at Oiau, Deidei, and Numa Numa. The local volcano observatory at Esa'Ala noted felt events on the 10th (26 events), 11th (12), 12th (6), and the 13th (3).

Geological Summary. The Dawson Straits, located between eastern Fergusson and western Normanby Islands in the D'Entrecasteaux island group, contains a volcanic field with several centers that define a possible partly submerged caldera. There have been no historical eruptions, but morphology suggests an extremely young age for some lava flows, and the area displays vigorous thermal activity. The most prominent volcanic centers are Mounts Lamonai and Oiau, located about 10 km apart on the SW tip of Fergusson Island. The summit of Lamonai is capped by a steep-walled crater, and rhyolitic lava flows are exposed on the NE side of the cone. The dominantly volcaniclastic Oiau cone has also produced obsidian lava flows. Dobu Island to the south is formed of coalescing volcanic centers and likewise has produced youthful rhyolitic obsidian flows.