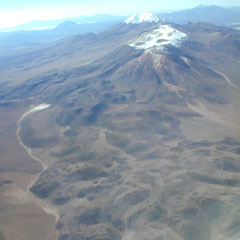 Geological Summary. A 15-km-long E-W ridge forming the border between Chile and Bolivia is comprised of several stratovolcanoes with Holocene lava flows. Andesitic-dacitic lava flows extend as far as 5 km N from the active crater of Volcán Olca and to the north and west from vents farther to the west. Olca is flanked on the west by Cerro Michincha and on the east by Volcán Paruma, which is immediately west of the higher pre-Holocene Cerro Paruma volcano. Volcán Paruma has been the source of conspicuous fresh lava flows, one of which extends 7 km SE, and has displayed persistent fumarolic activity. The only reported historical activity from the complex was a flank eruption of unspecified character between 1865 and 1867, which SERNAGEOMIN notes is based on unconfirmed records.