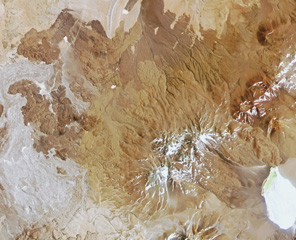 
Witnesses reported that "on 24 April at 1100 on a clear day with no clouds, a small eruption took place from Pular. It produced an explosion heard at El Laco (a Pacific Mining Company iron mine located 75 km NE; figure 3) and a column of black smoke that lasted just a few minutes above the summit, similar to those observed recently from Lascar." [but see 16:01] Geologists noted that the source of the 24 April eruption remains uncertain. Pular is believed to be Pleistocene in age.

Geological Summary. Cerro Pular on the NE end and Cerro Pajonales on the SW form a 12-km-long volcanic ridge NE of Socompa volcano that is mostly pre-Holocene, but may have experienced some more recent activity. The chain lies NW of the Salar de Pular, about 15 km W of the Argentinian border. Extensive andesitic lava flows reach the lower flanks of the volcanoes, and about 10 craters are present. A major satellite vent W of the ridge appears to be the youngest feature of the volcanic complex. An uncertain small explosive eruption was reported in 1990, but the vent location was not known.