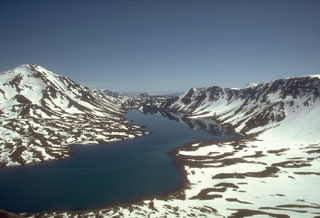 
On 14 July at about 2100, Richard Mack observed and photographed a white plume that had risen 350-500 m from the SW side of the summit crater of Mt. Hague, near the E margin of Emmons Lake Caldera. A series of pulses slowly diminished in size until sunset at about 2200. Traces of material trailed SSW from the top of the plume.

Mack stated that he had not seen such activity during his 57 years on the Alaska Peninsula. However, during fieldwork in 1946, Kennedy and Waldron (1955) observed six large fumaroles and many other small ones in a steep gully on the SW side of Mt. Hague, at altitudes of ~975-1,150 m. They did not give plume heights, but reported clouds of SO2 and steam rising from the major vents, with a locomotive-like noise that was audible ½ km away. The volume of sulfur fumes prevented the geologists from approaching nearer than roughly 100 m from the vents. Sulfur odors were strong many kilometers downwind. Sulfur cones ~1 m high had developed around the vents and extensive deposits of native sulfur were found in the gully. Miller (in Wood and Kienle, 1990) also reported a large fumarolic area on the S side of Mt. Hague.

Geological Summary. The massive Emmons Lake stratovolcano, located north of Volcano Bay and SW of Pavlof volcano, is truncated by one of the largest calderas of the Aleutian arc. The 11 x 18 km caldera contains a narrow elongated lake at its SW end that drains through a breach in the SE caldera rim to the Pacific Ocean. The compound caldera was formed during six voluminous dacitic-to-rhyolitic eruptions between about 294,000 and 26,000 years ago that produced extensive ashflow tuffs. Mount Emmons, Mount Hague, and Double Crater are post-caldera cones of dominantly basaltic composition that were constructed along the SW-NE trend of the elongated caldera, which is up to 1150 m deep. Some young Holocene flows have moved through a gap in the southern caldera rim to within 3 km of the ocean. A large fumarolic area is located on the south side of Mount Hague, and the only reported historical activity was the emission of steam plumes from Hague in 1990 and 1991.