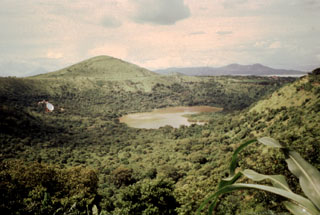 
"The alignment extends from Apoyeque to Managua (figure 1) and lies on the W boundary fault of the Managua graben. Phreatomagmatic and Strombolian activity occurred during the past 30,000 years, with about 40 separate eruptions, the most recent less than 2,500 years ago. A study well drilled to 300 m in the San Carlos crater did not detect thermal activity. There were reports of gas emission after earth tremors in the early 20th century (El Heraldo, 24 October 1916) and some aftershocks of the 1972 Managua earthquake were located on the alignment."

Geological Summary. The N-S-trending Nejapa-Miraflores alignment, located near the western margin of the Nicaraguan graben, cuts through the western part of Nicaragua's capital city, Managua. This alignment, which has erupted tholeiitic basaltic rocks similar to those from mid-ocean ridges, marks the right-lateral offset of the Nicaraguan volcanic chain. A series of pit craters and fissure vents extends into Lake Managua and is continuous with the volcanic vents on the Chiltepe peninsula. An area of maars and tuff cones perpendicular to the N-S trend of the lineament forms the scalloped shoreline of Lake Managua. Laguna Tiscapa crater is located several kilometers to the east near the central part of the city of Managua. The elongated Nejapa and Ticoma pit craters are surrounded by small basaltic cinder cones and tuff cones. The Nejapa-Miraflores alignment (also known as Nejapa-Ticoma) has been the site of about 40 eruptions during the past 30,000 years, the most recent of which (from Asososca maar) occurred about 1250 years ago.