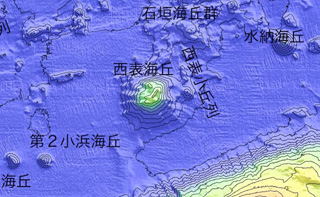 
High levels of seismicity . . . suddenly declined in late April (figure 1). A total of 670 high-frequency earthquakes were felt by the end of April, including nine of JMA intensity IV, and a M 4.3 event on 31 March. The swarm was centered on the NW coast of the island (figure 2) at 0-10 km depth (the majority at ~5 km). No surface phenomena (steaming, bubbling, or water discoloration) were found despite frequent patrolling over the island and adjacent sea area by JMSA aircraft.