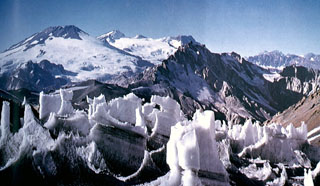 Bulletin of the Global Volcanism Network, vol. 16, no. 5 (May 1991)
Managing Editor: Lindsay McClelland.


A new fumarole field, 150 m below the rim on the S flank . . . was first observed in late February (figures 1 and 2). On 14 May, geologists from the Univ de Chile noted that the new activity was similar to that of earlier fumaroles associated with a small andesitic dome within the central crater.

Although no earthquakes were detected at the volcano, an increase in seismicity was recorded by the Univ de Chile's seismic network throughout the roughly N-S fault zone that separates the Valle Central and the Cordillera Andina. Four events were recorded in February, 8 in March, 9 in April, and 14 in May, the largest (M 4.0 and M 3.5) on 8 and 11 April, respectively (figure 3).

Geological Summary. Volcán San José lies along the Chile-Argentina border at the southern end of a volcano group that includes the Pleistocene volcanoes of Marmolejo and Espíritu Santo. The glaciated 6070-m-high Marmolejo stratovolcano is truncated by a 4-km-wide caldera, breached to the NW, that has been the source of a massive debris avalanche. San José is a 5856-m-high stratovolcano of Pleistocene-Holocene age with a broad 2 km x 0.5 km summit region containing overlapping and nested craters, pyroclastic cones, and blocky lava flows. Volcán la Engorda and Volcán Plantat, located SW of Marmolejo and NW of San Jose, have also been active during the Holocene. An 8-km-long lava flow traveled to the SW from the 1-km-wide summit crater of Espíritu Santo volcano, which overlaps the southern slope of Marmolejo. Mild phreatomagmatic eruptions were recorded from San José in the 19th and 20th centuries.