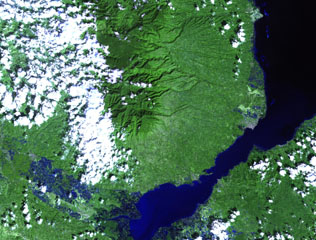 
Widely distributed reports of increased activity and up to 20,000 evacuees in mid-September proved false. Heavy cloud cover over the volcano and coincidental tectonic earthquakes prompted claims of an imminent eruption. PHIVOLCS scientists found no signs of activity, although they did locate a previously unknown geothermal area on a remote section of the volcano.

Geological Summary. The Pleistocene-to-Holocene Malindang stratovolcano, located on the western margin of Iligan Bay in north-central Mindanao, contains a small summit caldera. Legends record a large eruption from the 2404-m-high, dominantly basaltic-to-andesitic volcano in the past, although no historical eruptions are known (Salise et al., 1991). Reports of increased activity in 1991 at the time of tectonic earthquakes prompted widespread evacuations, but an eruption did not occur, although a previously unknown geothermal area was discovered.