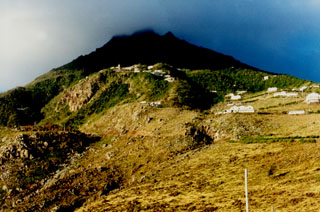 Bulletin of the Global Volcanism Network, vol. 17, no. 5 (May 1992)
Managing Editor: Lindsay McClelland.


A high-frequency seismic swarm began at the volcano on 4 June, peaking on 10-11 June, and centered along a roughly NE-SW zone 20 km long (figure 1). Of the numerous earthquakes recorded by the regional seismic network (most stations are E or S of the island), 12 were locatable. These events were concentrated at ~8 km depth (1-65 km depth range) and had magnitudes between 2.9 and 4.4 (the largest, at 27 km depth, was recorded at 0148 on 11 June). Several earthquakes were felt by island residents, but there were no reports of damage or injuries. On 13 June, a portable 3-component seismograph was installed on the island, previously uninstrumented, to supplement the regional seismic network, but activity declined, and only two additional events had been located as of 16 June.

Geological Summary. Saba, the northernmost active volcano of the West Indies, is a small 5-km-diameter island forming the upper half of a large stratovolcano that rises 1500 m above the sea floor. Its eruptive history is characterized by the emplacement of lava domes and associated pyroclastic flows. The summit of the volcano, known as Mount Scenery (or The Mountain), is a Holocene lava dome that overtops a major collapse scarp that formed about 100,000 years ago. Flank domes were constructed on the SW, SE, east, and NE sides of the island near the coast. A large andesitic lava flow entered the sea on the NE flank, forming the Flat Point Peninsula, the only site level enough on which to locate the island's airport. The village of The Bottom overlies pyroclastic-surge deposits that contain European pottery fragments and were radiocarbon dated at 280 +/- 80 years before present. The village was settled in 1640 on grassy meadows on the volcano's flanks reflecting initial vegetation recovery following destruction of tropical rainforests by pyroclastic flows and surges. Lava dome growth may also have occurred during this SW-flank eruption.