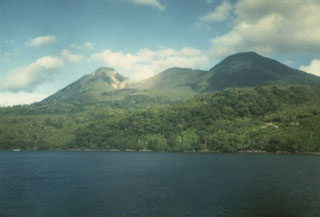 
Landslides and steam emissions on Wurlali volcano were triggered by MM IV-V earthquakes near the [island]. About 4,000 people fled the area, and one of the evacuees died of shock. Staff from VSI observed small landslides and cracks in house walls. There was no volcanic activity observed following the landslides, but the usual white plumes continued to rise 30-50 m above the crater. Tectonic earthquakes were continuing at rates of 14-32/day on 8 February.

Geological Summary. Wurlali volcano, also known as Damar, is the SW-most historically active volcano in the Banda arc. The andesitic stratovolcano was constructed at the northern end of a 5-km-wide caldera on the eastern side of Damar Island in the Banda Sea. Fumarolic activity occurs in the twin summit craters and on the SE flanks, producing exploitable sulfur deposits. An explosive eruption in 1892 is the only known historical activity.