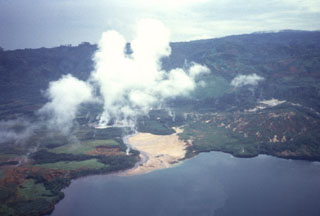 Bulletin of the Global Volcanism Network, vol. 19, no. 5 (May 1994)
Managing Editor: Richard Wunderman.

"We sent our team to investigate the area where the phreatic explosion occurred. The team arrived at Suoh on 19 February, three days after the earthquake. Two new mud explosion pits, 5 m in diameter, were found W of the Suoh depression. Liquifaction was consistently found at fractures associated with the earthquake. The two explosion pits contained boiling water."

Tables 1 and 2 present data on water and gas samples taken from two sites in the Suoh area during the investigation.

Geological Summary. The 8 x 16 km Suoh (or Suwoh) depression appears to have a dominantly tectonic origin, but contains a smaller complex of overlapping calderas oriented NNE-SSW. Historically active maars and silicic domes lie along the margins of the depression, which falls along the Great Sumatran Fault that extends the length of the island. Numerous hot springs occur along faults within the depression, which contains the Pematang Bata fumarole field. Large phreatic explosions (0.2 km2 tephra) occurred at the time of a major tectonic earthquake in 1933. Very minor hydrothermal explosions produced two 5-m-wide craters at the time of a February 1994 earthquake.