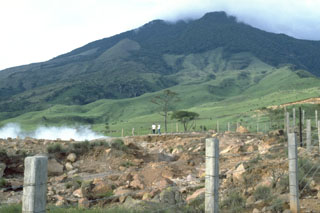 
"The Office of Seismology and Volcanology of the Department of Geological Engineering, Costa Rican Institute of Electricity (ICE), has monitored the seismicity of the Miravalles Geothermal Field since 1977. The monthly number of recorded earthquakes at the Miravalles Caldera from April 1991 through July 1994 is shown on figure 1. Maximum magnitudes were 3.5; no high-magnitude local earthquakes occurred within the geothermal field during this study period. Previous seismological campaigns showed a similar level of activity.

"The 219 tectonic events located during this period were distributed within a radius of 15 km of the geothermal field. There were some clusters of events that from their location and alignment could be correlated to previously determined faults and structures in the area and they were cataloged in 8 groups. Earthquakes recorded during the monitoring campaign were mostly shallow, with depths of 0-15 km and predominantly 0-5 km. The distribution of earthquakes cannot be correlated with a magma chamber or any shallow magmatic body in the area, but it confirms that some seismic activity is taking place under and inside the caldera."

Geological Summary. Miravalles is an andesitic stratovolcano that is one of five post-caldera cones along a NE-trending line within the broad 15 x 20 km Guayabo (Miravalles) caldera. The caldera was formed during several major explosive eruptions that produced voluminous dacitic-rhyolitic pyroclastic flows between ~1.5 and 0.6 million years ago. Growth of post-caldera volcanoes in the eastern part of the caldera that overtopped much of the eastern and southern caldera rims was interrupted by edifice collapse which produced a major debris avalanche to the SW. Morphologically youthful lava flows cover the W and SW flanks of the post-caldera Miravalles complex, which rises above the town of Guayabo on the flat western caldera floor. A small steam explosion on the SW flank was reported in 1946. High heat flow remains, and it is the site of a large developed geothermal field.