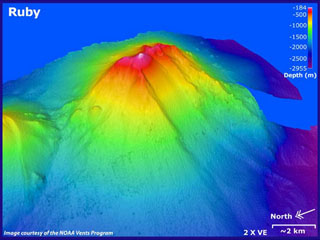 
Ruby is a prominent, active submarine volcano in the Mariana Arc (2,300 km S of Tokyo) located NW of the Island of Saipan (figure 1). Although signs of an eruption were first noted by fishermen about 11 October, initial attempts to confirm their early observations failed. On 23 October fishermen reported that they could hear submarine explosions in that vicinity. A vessel from the Wildlife and Emergency Management Office of the Commonwealth of the Northern Mariana Islands confirmed these reports. An Associated Press news report stated that early on 25 October observers had seen dead fish and bubbles, and had smelled a sulfurous odor. On 27 October the Pacific Daily News reported the eruption site as 15°36'22"N, 145°34'33"E (15.6061°N, 145.5758°E). This spot clearly lies on the edifice identified by Bloomer and others (1985, p. 215) as Ruby (only ~1.7 km from the point specified in this report's heading).

Prior to the eruption, published estimates of the summit elevation suggested a 230-m depth, a refinement an earlier estimate of 549 m (Bloomer and others, 1985, p. 215). On 6 October 1995, the Pacific Daily News report stated the summit was measured at 185-m depth. This newly reported depth remains unconfirmed. According to Mike Blackford, on 23 October a marine depth finder reportedly measured a depth of ~60 m. Although this could be a reflection off the eruptive plume, in the absence of any discussion of instrument type and calibration, this depth remains equivocal.

A fish recovered at the eruption site was found to have small particles of ash in its gills and HVO researchers planned to analyze this ash. News of the eruption caused concern about a possible local tsunami and on 25 October, the Commonwealth of the Northern Mariana Islands issued an alert.

Geological Summary. Ruby, a basaltic submarine volcano that rises to within 230 m of the sea surface near the southern end of the Mariana arc NW of Saipan, was detected in eruption in 1966 by sonar signals (Norris and Johnson, 1969). In 1995 submarine explosions were heard, accompanied by a fish kill, sulfurous odors, bubbling water, and the detection of volcanic tremor.