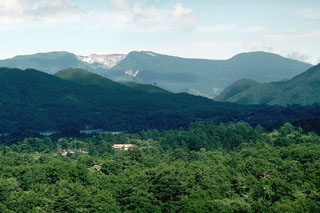 
A small-scale phreatic eruption suddenly took place on 1 September. On 4 September a survey team from the Japan Meteorological Agency (JMA) verified that mud was sprayed ~100 m from small pits at the summit area (Numanotaira). Mud crusts and mud flows were found around three pits, and a strong odor of sulfurous gas was noted. Some mountaineers witnessed and photographed this eruption. Although both Tohoku University and JMA monitor seismicity of the volcano, no seismic activity was recorded just prior to or during the eruption. After the eruption, there was also no evidence implying an increase in seismicity. This has been the first observation of eruptive phenomena since monitoring began in 1965. Volcanic tremor was last reported in April (BGVN 21:04). The JMA seismic net also recorded volcanic tremor once in June.

A survey by Tatsuro Chiba of Asia Air Survey Co. Ltd. indicated that mud effusion on the Numanotaira crater floor also occurred in July and August of this year. The Asahi TV Company took pictures of mud bubbling in one of the pits during mid-August. According to Tatsuro Chiba, two of three pits in the crater already had existed before 1 September and the third pit might have been formed during the 1 September eruption.

Geological Summary. The broad forested massif of Adatarayama volcano is located E of Bandai volcano, about 15 km SW of Fukushima city. It consists of a group of dominantly andesitic stratovolcanoes and lava domes that rise above Tertiary rocks on the south and abut Azumayama volcano on the north. Construction took place in three main stages that began about 550,000, 350,000, and 200,000 years ago. The high point of the complex is 1728-m-high Minowasan, a dome-shaped stratovolcano north of Tetsuzan, the currently active stratovolcano. Numanotaira, the active summit crater, is surrounded by hot springs and fumaroles and is breached by the Iogawa river ("Sulfur River") on the west. Seventy-two workers of a sulfur mine in the summit crater were killed during an eruption in 1900. Historical eruptions have been restricted to the 1.2-km-wide, 350-m-deep Numonotaira crater.