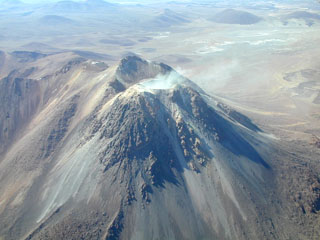 
In the course of field work on volcanic rocks in the region, Anita Grunder observed a dark, vertical plume coming from the top of Irruputuncu at about 1000 on 26 November 1995. This dark plume lasted a few minutes, then returned to a white plume, and then again became dark and returned to white. The dark plume was dark gray to black and of the same puffy form as the white plume. The plumes dispersed very slowly to the E and the column height was same whether black or white. It was hard to judge the column size, but it seemed perhaps a few times the relief of the volcano suggesting they were kilometers tall. Grunder's field assistant, Maximino Burotto Huerta, said he had seen similar behavior on 1 September. Ordinarily, either a white wisp of steam or nothing is seen emanating from the peak. The sighting on 26 November was from ~30 km SSE, not far from the village of Ujina.

Grunder was in the area for 31 days between 24 August and 5 December 1995, though typically not in sight of the volcano. She observed no plumes on 27 November and 1-5 December 1995. These observations suggested that the activity consisted of modest phreatic eruptions.

Available literature lacks clear documentation of any historical Irruputuncu eruptions. The stratovolcano was the subject of unconfirmed press reports of an eruption in December 1989, but when visited by a state geologist on 25 March 1990 he found only fumarolic activity (BGVN 15:03). Irruputuncu sits within the collapse scarp related to a Holocene debris avalanche. There are two summit craters, the southernmost of which has been fumarolically active.

Geological Summary. Irruputuncu is a small stratovolcano that straddles the Chile/Bolivia border. It is the youngest and most southerly of a NE-SW-trending chain of volcanoes. It was constructed within the collapse scarp of a Holocene debris avalanche whose deposit extends to the SW. Subsequent eruptions filled much of this scarp and produced thick, viscous lava flows down the W flank. The summit complex contains two craters, the southernmost of which is fumarolically active. The first unambiguous historical eruption took place in November 1995, when phreatic explosions produced dark ash clouds.