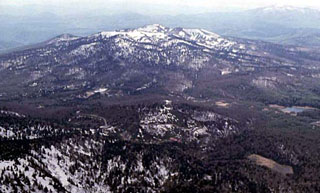 
According to a Japan Meteorological Agency (JMA) volcanic advisory issued in the evening of 16 August, a tourist reported a small-scale phreatic explosion at the Karanuma ("Empty Pond") crater near the summit. The explosion occurred at about noon on 16 August. Seismometers at the volcano recorded volcanic tremors during 1053-1204; high numbers of volcanic earthquakes were recorded in the days following the explosion (table 1). JMA estimated that the epicenters were just below the summit.

Table 1. Seismic activity at Akita-Yake-yama during 16-25 August 1997. Reported on the Volcano Research Center's Current Eruptions in Japan website from JMA reports for 22 and 25 August.

A 17 August JMA report detailed the discovery of a new crater 20 m in diameter on the SE rim of Karanuma Crater. Eruptive material including fragments up to 20 cm in diameter were found around the new crater, and volcanic ash "pastes" had been sprayed ~300 m to the S. The report noted that the new crater no longer emitted an eruption cloud on 17 August.

T. Oba and T. Hasenaka, geologists at Tohoku University, conducted a field inspection on 17 August. They reported that the new crater was quiet, and that it had a depth of ~30 m. Fragments up to 30 cm across had been thrown ~25 m away from the crater, but no juvenile materials were included. Ash deposits on the ridge 20-30 m S of the new crater were 4-5 mm thick. The scientists suggested that the 16 August eruption may have created a "new" crater within an old crater formed in 1949, because the volume of recently erupted material was too small to account for the total volume of the crater.

Shintaro Hayashi, a geologist at Akita University, conducted a field inspection on 18 August; he estimated the volume of fallout from the new crater to be ~1,000 m3. He also reported that a mud flow was generated just before the 16 August explosion issued from small depressions just below the new crater (figure 1). The mud was deposited around the depressions, having flowed part of the way down to the crater floor. The total volume of the mud-flow deposit was estimated at ~20,000 m3.

On 20-21 August, new seismometers were installed near the summit and N slope of the volcano; also installed were a microphone on the W foot and cameras (color, high resolution monochromatic, and infrared) on the E foot. Signals are telemetered to Sendai and Akita.

On 22 August, Tatsunori Soya, of the Geological Survey of Japan, drew attention to a document written by the late Prof. H. Tsuya. The document, which appeared in the Tamagawa Hot Spring Study Group's 10th Anniversary Report (1954), describes explosions in 1949, 1950, and 1951 at Akita-Yake-yama; the last two were not officially documented. According to the report, large explosion craters (C1-C4), including the Karanuma crater (C1), existed before the 1949 eruption. Eruptions in 1949 occurred on the E margin of the Karanuma crater, resulting in the formation of craters designated A1, A2, and A3. Although no one in the hot springs area 3 km E of the summit reported hearing an explosion or feeling earthquakes, the eruption products were ~1 m thick along the rim of the A1 crater and contained old lava blocks up to 1 m across. Another explosion occurred at the A1 crater in February 1951; as a result, A1 crater widened to become as much as 50 m across. In terms of volume, the 1951 explosion was smaller than the 1949 eruption. S. Hayashi proposed that the present explosion occurred in A2-A1, and mud spouted out from the A3 crater (figure 1).

Geological Summary. One of several Japanese volcanoes named Yakeyama ("Burning Mountain"), Akita-Yakeyama is the most recently active of a group of coalescing volcanoes in NW Honshu immediately west of Hachimantai volcano. The main volcano, Yakeyama, contains a small lava dome in its 600-m-wide summit crater. Tsugamori volcano to the east is a stratovolcano of roughly the same height and has a 2-km-wide crater breached to the NE. The flat-topped parasitic lava dome of Kuroshimori lies 4 km south of Yakedake. Tamagawa Spa at the western foot, one of several thermal areas, is strongly radioactive. The last magmatic eruption formed the Onigajo lava dome in the summit crater about 5000 years ago. The only known historical activity has consisted of somewhat uncertain 19th-century eruptions and mild phreatic eruptions in the 20th century.