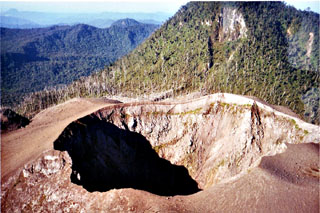 Bulletin of the Global Volcanism Network, vol. 24, no. 5 (May 1999)
Managing Editor: Richard Wunderman.


During 9 March-24 May activity initially increased but later diminished. Volcanic activity increased during 9-15 March and people in the local settlement heard booming noises about 20 times/day. From 16 to 22 March, volcanic activity continued at the same scale, but the booming noises weakened. The seismic record also illustrated decreased intensity. Activity continued through the week of 23-29 March without diminishing, but the booming noises ceased. Volcanic and tectonic events increased, with volcanic type-B earthquakes rising from 6 to 15 and tectonic events increasing from 1 to 18. From 27 April to 3 May volcanic earthquakes increased and an eruption emitted white-gray ash to 200 m.

Activity began tapering during 4-10 May. A white plume was observed at heights of 10-20 m. Volcanic shocks decreased. Activity continued to decline during 11-17 May, with a plume ranging from 10 to 200 m heights. Volcanic activity was not recorded during 18-24 May, but observers reported 14 "thin white ash plumes" rising 10-50 m.

The Peuet Sague stratovolcano contains four summit peaks. The crater believed to be active resides SE of one of the peaks of the lava dome (Mount Tutung). This narrow crater has a diameter of about 70 m and a depth of 80 m. The last major eruption occurred in 1918-21 when ash was emitted, a lava dome was formed, and pyroclastic flows spilled into surrounding uninhabited forests. A 1975 team that reached the peak found no eruptive activity, but documented a lake (500 x 800 m) at the foot of Mount Tutung. Within Tutung's crater they found a small (40 x 75 m) blue lake surrounded by four solfataras. Scientists inspecting the summit area in 1984 found burned trees surrounding the main crater, likely due to a 1979 eruption. Local eyewitnesses and pilots reported ash columns above the summit in 1979, 1986, and 1991.

Geological Summary. Peuet Sague is a large volcanic complex in NW Sumatra. The volcano, whose name means "square," contains four summit peaks, with the youngest lava dome being located to the N or NW. This extremely isolated volcano lies several days journey on foot from the nearest village and is infrequently visited. The first recorded historical eruption took place from 1918-21, when explosive activity and pyroclastic flows accompanied summit lava-dome growth. The active crater is located NE of the Gunung Tutung lava dome and has typically produced small-to-moderate explosive eruptions.