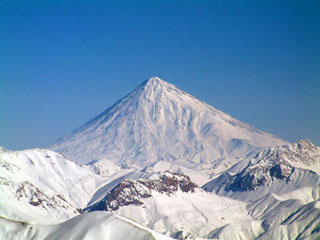 
On 1 August 1999, a group from the Societe de Volcanologie Geneve ascended the ice- and rock-covered summit. On the way up the N flank they saw vertical coal deposits below 2,450 m elevation, reaching thicknesses of tens of meters. Above 4,000 m elevation huge blocks were seen that appeared to have traveled from ~1 km above. Just below the summit were large sulfur-bearing blocks that appear to be mixed with a clay- like material. Within 100 m of the N rim of the summit chunks of pure sulfur were observed. The circular summit crater was ~150 m in diameter. In the center of the crater lay a small frozen lake approximately 40 m across. From the N rim of the summit, an active fumarole could be seen to the south.

Geological Summary. The Damavand stratovolcano is located 70 km NE of Iran's capital city of Tehran and 70 km S of the Caspian Sea. A younger cone has been constructed during the past 600,000 years over an older edifice, remnants of which were previously interpreted as a caldera wall. Flank vents are rare, and activity at the dominantly trachyandesite volcano has been concentrated at the summit vent, which has produced a series of radial lava flows. Lava effusion has dominated, pyroclastic activity has been limited, and the only major explosive event produced a welded ignimbrite about 280,000 years ago. The youngest activity, from the summit vent, produced a series of lava flows that cover the W side of the volcano. The youngest dated lava flows were emplaced about 7,000 years ago. No recorded eruptions are known, but hot springs are located on the flanks, and fumaroles are found at the summit crater.