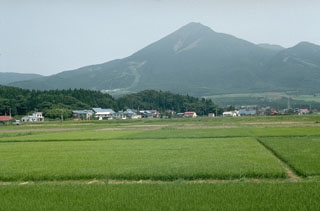 
The last increase in seismicity at Bandai (located in the Fukushima prefecture about 20 km N of Tokyo) occurred in November 1988 (SEAN 13:11) when a total of 188 seismic events was recorded, up sharply from the background level of ~20 events/month. In contrast, at the same site up to 416 seismic events were recorded in one day when seismicity increased during 14-16 August 2000.

On the afternoon of 16 August the Japanese Meteorological Agency (JMA) issued a volcano advisory for Bandai. An abnormally high number of earthquakes, including felt earthquakes and volcanic tremor, was recorded at the A site seismometer 1.8 km SSE of the summit. The increase began on 14 August when 179 seismic events were recorded; this was the greatest seismicity to occur at the volcano since seismic monitoring began in 1965. On 14 August two of the four M 2 earthquakes that occurred were felt, and a volcanic tremor event lasted for 31 seconds. On 15 August the level of seismicity increased to 416 events, and two volcanic-tremor events lasted 40 and 55 seconds, respectively. At 2304 on 15 August a M 2.9 earthquake occurred, which was the largest event in the series. As of 1400 on 16 August there were 41 events. On 18 August a climbing ban was placed on the volcano. Due to the abnormally high level of seismicity, scientists monitored closely for signs of an impending eruption. Scientists observed no large change in GPS data or images from the monitoring camera. On 28 September officials lifted the climbing ban but warned climbers that an eruption could still occur.