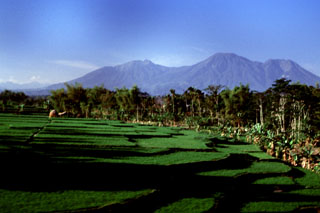 
MODIS thermal alerts at Kawi-Butak during 2001 and 2002 occurred only in August and October 2002 mostly to the SE of the summit. These almost certainly represent fires rather than volcanic events. The biggest detected alert occurred on 12 October and was characterized by seven alert-pixels with maximum alert ratio of -0.298. These alert pixels were in a group including the summit and the N flank, and are the best candidate for an eruption, though it is unlikely that an eruption of the kind required to trigger such an alert (a significant lava dome or flow) would have gone unreported. The Volcanological Survey of Indonesia confirmed that there was no eruption at Kawi-Butak on 12 October 2002 and that the thermal alert was indeed caused by a bush fire.

Geological Summary. The broad Kawi-Butak volcanic massif lies immediately E of Kelut volcano and S of Arjuno-Welirang volcano. Gunung Kawi was constructed to the NW of Gunung Butak. No historical eruptions are known from either volcano, but both are primarily of Holocene age.