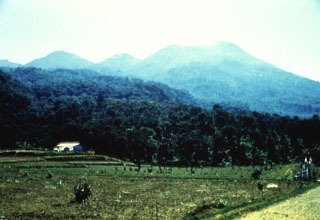 The Volcanological Survey of Indonesia reported that the volcano was at Status Level I (no activity) in October 2002. No observations were reported, but only distant tectonic earthquakes were detected at the seismograph station.

An explosive eruption took place in the NW part of Gunung Welirang in October 1950, and eruptive activity was reported on the NW flank (Kawah Plupuh) in August 1952. Steam plumes from the summit of Welirang were photographed from space on 13 September 1991 (BGVN 16:08) and in mid-November 1994.